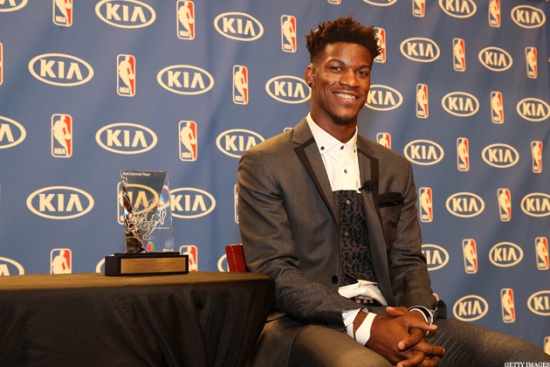 After completing the Gold Gloves (thank God!) we wanted to do something away from Baseball and we picked a relatively new award, The NBA Most Improved Player of the Year.

On the surface, it would seem like anyone who improved enough to get this award likely had less than auspicious beginnings, which may mean that not very many of these players are Hall of Famers, but this is why we do this process!

The following are the past players who have won the Most Improved Player in the NBA who are eligible for the Naismith Basketball Hall of Fame and have been enshrined.

26.8 PPG, 7.5 RPG, 4.6 APG, 1.5 SPG, 1.5 BPG.  It took the award seventeen years of existence before we found our first Hall of Fame inductee (unless previous inductee Kevin Johnson gets in) but regardless if what happens with KJ, this is the first real NBA superstar we are talking about here.  McGrady was with the Toronto Raptors the season before where he started nearly half of his games but this year he was Orlando’s starting Shooting Guard and his Minutes per Game increased from 31.2 to 40.1 with a PPG rise from 15.4 to 26.8 and a PER increase from 20.0 to 24.9.  He would be named a Second Team All NBA member and would later win two scoring titles in his career.    Inducted into the Hall of Fame in 2017.

The following are the players who have won the NBA Most Improved Player of the Year Award who are eligible for the Naismith Basketball Hall of Fame and have not been selected:

17.0 PPG, 6.3 RPG, 5.5 APG, 3.7 SPG, 0.5 BPG.  This was the sophomore season for Alvin Robertson whose minutes shot up from 21.3 to 35.1 per Game.  Increased time certainly led to the increased production as he increased his PPG from 9.2 to 17.0 and more notably would win the Steals Title with a career high of 3.7 per Game.  For his efforts this year, the San Antonio Spur would be chosen for his first All Star Game, would also win the Defensive Player of the Year and was a Second Team All NBA Selection.  This would be his best season as he had a career high 19.5 PER, 6.2 VORP and 8.6 Win Shares.  Robertson would go to three more All Star Games and make more All-Defensive Selections, but he never had a better regular season than this in the NBA.  Ranked #47 on Notinhalloffame.com.

24.9 PPG, 5.5 RPG, 2.9 APG, 1.3 SPG, 0.4 BPG.  Dale Ellis played for the Dallas Mavericks for the first three seasons of his career where he came off of the bench but in his first season with the Supersonics he was a starter and he more than tripled his Points per Game from 7.1 to 24.9 and in the next three seasons he would equal his 20 PP and 19.0 plus PER.  However, he was only an All Star once.  Ranked #97 on Notinhalloffame.com.

15.8 PPG, 7.4 RPG, 0.8 APG, 0.4 SPG, 0.4 BPG.  Kevin Duckworth would be later go to two All Star Games and in this season, which was his third in the NBA he was a starter for the first time doubling his minutes from 14.8 and 28.6.  Playing for Portland, the Center would increase his PPG from 6.0 to 15.8 and doubled his Rebounds per Game from 4.8 to 7.4 but his Blocks per Game remained at 4.0.  His PER was also only 14.9 but this was actually his career high and he had a VORP of -0.5.  Duckworth actually NEVER had a VORP that had a positive integer.  I guess we are saying that he really didn’t improve by much! Unranked on Notinhalloffame.com.

20.4 PPG, 4.2 RPG, 12.2 APG, 1.7 SPG, 0.3 BPG.  Kevin Johnson was in his sophomore season and as a rookie he was traded from the Cleveland Cavaliers to the Phoenix Suns where he would become the starting Point Guard.  K.J. now played nearly 40 Minutes per Game (up from 24.0) and this would be his first of four straight 10 Assist seasons, and the 12.2 he had this year would be his highest.  Johnson would be named a Second Team All NBA Selection this year, and he would earn that honor again three more times.  While the Naismith Basketball Hall of Fame does not yet inducted him, he is a strong contender to enter in the future.  Ranked #9 on Notinhalloffame.com.

17.2 PPG, 3.4 RPG, 8.4 APG, 1.1 SPG, 0.1 BPG.  This would be the only individual accolade for Scott Skiles who had his best season in almost every metric.  This was a significant jump from the previous season in regards to his stats but in what was his fifth season in the NBA was also his halfway point of his professional career.  Unranked on Notinhalloffame.com.

20.0 PPG, 11.2 RPG, 2.9 APG, 0.9 SPG, 2.7 BPG.  There is no argument that in what was the third NBA season of Pervis Ellison’s career that it was not just a warranted Most Improved Player of the Year Award year but it was by far and away the best campaign of his career.  This was the only double-double season of the Center’s career but also the only 20 PPG season for Ellison who nearly doubled his Points from the year before.  Unranked on Notinhalloffame.com.

19.2 PPG, 2.8 RPG, 4.2 APG, 1.0 SPG, 0.1 BPG.  Mahmoud Abdul-Rauf had his first of three 18.0 Points per Game Seasons, this one being a 19.2 PPG, which was a career high. This was his third season in the NBA and he had a significant increase in all stats, but as this was his highlight and it was not an All Star worthy one, we don’t have much of a Hall of Fame threat here.  Unranked on Notinhalloffame.com.

18.2 PPG, 6.2 RPG, 2.1 APG, 0.6 SPG, 0.3 BPG.  Hmmm.  This was the best season by far of Don MacLean’s career but if this was the best are we even close to a Hall of Fame career?  We are not!  After this season (he won his award in his second year) he never had a statistical campaign like this again and he would never come close to any award.   Unranked on Notinhalloffame.com.

20.6 PPG, 3.3 RPG, 7.5 APG, 1.8 SPG, 0.0 BPG.  This was the sixth season of Dana Barros’ career and by leaps and bounds the best.  The above stats destroyed anything else he did before or after and this was also his only All Star campaign.  Barros would never come close to another individual award again.   Unranked on Notinhalloffame.com.

14.5 PPG, 9.6 RPG, 0.7 APG, 0.7 SPG, 2.3 BPG.  The star of Billy Crystal’s “My Giant” would win what would be his only individual award here and this was also his best season in the NBA. All of the above stat line would be career highs and he would finish first in Field Goal Percentage and was eighth in Blocks per Game.  He would only be in the NBA for four years after this, one of which he had to sit out due to injury.  Unranked on Notinhalloffame.com.

9.7 PPG, 5.8 RPG, 1.2 APG, 0.5 SPG, 0.5 BPG.  This was the sixth professional season of Isaac Austin’s career however it needs to be noted that the previous two seasons Austin played overseas and was in the Turkish League the year before.  Was anyone really aware of how he improved from the season before?  For what it is worth, he improved the next two years as an NBA player.  Unranked on Notinhalloffame.com.

18.2 PPG, 4.8 RPG, 4.0 APG, 1.1 SPG, 0.6 BPG.  This was the sixth season for Jalen Rose and his fourth in Indiana.  In his first two seasons, he was a starter in Denver, but wet to Indiana on a bench role. This season, Rose returned as a starter and he put up the best numbers (up until that point) this year.  The former member of Michigan’s “Fab Five” raised his PPG over 7 Points and doubled his Assists.  His PER went up from 14.4 to 16.7.  Unranked on Notinhalloffame.com.

The following are the players who have won the Most Improved Player in the NBA who have retired but have not met the mandatory years out of the game to qualify for the Basketball Hall of Fame:

The following are the players who have won the NBA Most Improved Player who are still active.

20.2 PPG, 15.2 RPG, 2.5 APG, 0.6 SPG, 0.4 BPG.  Love shot up in both Points and Rebounds in what was his third season improving 6.2 and 4.2 respectively in those categories per Game, with a 7.2 Minutes per Game increase.  Love would be chosen for his first of five All Star Games and his 15.2 Rebounds per Game would be a career high and would give him the Rebounding title. The Power Forward also saw a decent rise in his PER from 20.7 to 24.3 and more than doubled his Win Shares going from 4.9 to 11.4.  30 Years Old, Playing for the Cleveland Cavaliers.

23.1 PPG, 5.2 RPG, 4.3 APG, 2.4 SPG, 0.8 BPG.  How frustrated must Orlando Magic fans have been when they saw Oladipo break out like this?  This was the season they always thought he was capable of and it happened in his first season in Indiana.  With only a Minutes per Game increase from 33.2 to 34.0 he shot up from 15.9 Points to 23.1 Points per Game and doubled his Steals from 1.2 to 2.4 per Game, which was enough to earn him the Steals Title.  Oladipo was a Third Team All-NBA Selection and he went to his first All Star Game.  His PER also had a massive increase from 13.6 to 23.1.  26 Years Old, Playing for the Indiana Pacers.

As you can see the current result with only one player (Tracy McGrady) who has made the Hall of Fame but with the recent winners who are still active we could easily see this percentage rise.  We initially thought that we would see a higher number as if you are the winner of this award you must be pretty good but there were a few winners here that we openly question and with the recent winners there seems to be an overall improvement, which we think will result in a higher percentage of Hall of Famers.

Up next we are going to back to the National Hockey League and the Calder Trophy, which is presented annually to the league’s top rookie.