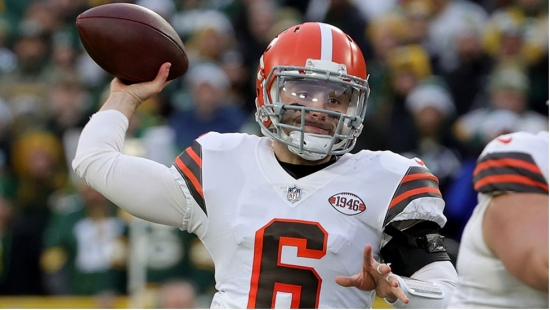 Baker Mayfield is expected to skip the Cleveland Browns’ trip to the Bahamas this weekend as his replacement, Deshaun Watson is the one treating the team to it, according to Mary Kay Cabot of Cleveland.com.

Watson is using part of his massive contract for team bonding and tropical offseason workouts and, according to the aforementioned source, Mayfield will remain in the U.S while the new quarterback familiarizes himself with his new teammates.

The trip will be similar to the one Mayfield put together in his hometown of Austin, Texas a few years ago, only that it will be out of the country.

Mayfield is still actively looking for a trade while rehabbing his shoulder and will not be part of the contingent that heads to the Bahamas.

Ian Rapoport previously reported that he was certain Mayfield would be part of the Browns’ training camp but it’s now looking unlikely. Rapoport spoke on the Pat McAfee show recently and describes what he believes is the former No.1 pick’s thinking.

“Baker is, I'm not trying to make excuses, but I understand from Baker Mayfield’s standpoint why he'd be like, ‘You know what, I'm going to stay away,’” the reporter said. “He feels a certain way about the organization. He believes that they told him one thing and then did the other. I would say the opportunity to trade for Deshaun Watson was something that even caught the Browns out of nowhere because remember, he told them no a day before that.

He then touched on Mayfield possibly showing up for mandatory workouts and training camp, stating he was “sure” the 27-year-old will be there.

“That is either the first week of June or the second week of June and then he's got to be at training camp,” he continued. “You know, training camp would be awkward. I'm sure he will show up. I'm sure it'll either be some sort of agreed upon (deal). ‘You know what you can sit out’ or maybe like a hold-in (by saying) he has migraines or a hamstring injury or a back injury or something like that. I think in the end they can come up with a situation that both sides agree with, but it is going to be weird until they get to that point.”

Mayfield had a pass completion percentage of 60.5 last season, going for 4,010 yards and 17 touchdowns along with 13 interceptions in 14 games. He struggled with a shoulder injury for most of the campaign.

He’s now in an unfortunate situation, with the Browns having signed Watson while his salary has made it difficult for him to find a new home. Mayfield is owed 18.86 million in fully guaranteed salary for 2022, which has made a trade hard to come by.

The Carolina Panthers and Seattle Seahawks have been linked to the QB but they might wait to see if Cleveland will cut the player before training camp.

The new acquisition has heightened the Browns’ chances of winning a Super Bowl in 2022/23. They’re currently 18/1 to snag the trophy next season and Ohio sports betting folk will probably have them among their picks.

While Mayfield’s predicament does have fans feeling sorry for him, former QB Steve Young has told the disgruntled star to stop playing the victim. Young knows adversity all too well, having struggled while in Tampa Bay before spending a few years as a backup for Joe Montana and then going to prove his worth as a star with the San Francisco 49ers.

Speaking on The Rich Eisen Show on Monday, Young urged Mayfield to own his mistakes.

"You can’t play the victim," he said, per 247Sports’ Brad Crawford. "Victimization has to be put in a bottle and buried in the ground because it’s too easy to play victim. Look, there’s a lot of things out of your control and a lot of (things) you’ve been done wrong. You cannot, in the NFL, survive and play the victim. You have to leave it behind and own every bit of it.

"Own every mistake you’ve ever made. Own how you got here. Don’t blame other people. You got yourself here. You’re here. You own it and that would go a long way for everybody to feel like Baker Mayfield can make the elements of a comeback. You can’t get there in the spirit of victimization. It can’t happen."

More in this category: « Tips for Betting on Basketball Top Three Japanese Online Casinos Sites and Why You Should Check Them Out »