A look at the career of the finest player on the planet: LeBron James 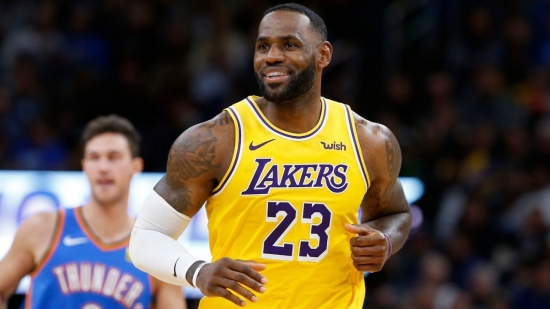 LeBron James is simply formidable. The best player to have ever graced a basketball has been a regular on the court this season, averaging 25.8 points per game. Only recently has an ankle injury forced him to miss his first game of the season.

Before then, basketball’s biggest star had led the Lakers to a win against his old team, the Cleveland Cavaliers, earlier in the year. The Cavaliers themselves had put on one of their best performances, despite the result going against them. After three quarters, they’d been leading the Lakers 89-87, but then James stepped things up in the fourth quarter.

Can the Lakers win the NBA title this season? It’s a big question now that their main man has been side lined by injury. The Brooklyn Nets and the Milwaukee Bucks have both been tipped to give the Lakers a hard time this season, which will make the league extra exciting for anyone looking at this year’s NBA betting lines.

This post looks at some of the career highlights of the best player of all time: LeBron James.

James was but a teenager when he made his debut in the NBA. The Cavaliers didn’t achieve the win that night, but James kept his cool on basketball’s biggest stage and scored 28 points and chalked up six rebounds and nine assists.

All eyes were going to be on him from then. Everyone realized the NBA had unearthed a new superstar, and in his era with the Cleveland Cavaliers, he’d go on to win the Rookie of the Year.

Not only was James’s NBA debut a game to remember, but his playoffs debut was one as well. The forward was in blistering form against the Washington Wizards and posted 32 points, 11 rebounds, and 11 assists. The Cavaliers won, and it was the first time anyone had posted a triple double in their NBA playoff debut since Magic Johnson.

Game-winning shot on the buzzer against the Orlando Magic

James has been part of some big moments, but no one will forget the drama of the game against the Orlando Magic. In the finals in the Eastern Conference in 2009, the two teams were deadlocked before James broke it right on the buzzer and clinched the Cavaliers the game. The Magic may have won the series, but the score was another big playoff moment for James.

In 2010, James received his first MVP, for the 2009 season. He’s received a nomination for MVP every year since then, and when he was with the Cavaliers at the time of the award it was an honor for him to accept the award. It was in the state he called home and where his dream of being a basketball player began.

The year 2010 opened with a shock announcement from James, on TV, that he would be leaving the Cavaliers and joining the Miami Heat. He would spend four years with the Heat and take them to the NBA finals each year. Finally, the team won the NBA title in 2012. The glory may have come, but this original decision to part company with the Cavaliers attracted a lot of criticism.

Some might have loathed James’s decision to join the Heat, but Miami certainly weren’t complaining, and in 2013, the team had a sublime season. With James on the team, the Heat won 27 consecutive games, an unbeaten run which lasted 53 days. Only the 71-72 LA Lakers had a longer record: 33 games unbeaten.

The return to Cleveland

In 2014, it was smiles all around in Cleveland as James returned to the Cavaliers. In his second stint with the team, he’d take them to finals. In 2016, the Cavaliers would take the title, but game seven of the finals would be especially remembered for James’s chase-down of Andre Iguodala.

The Golden State Warriors were about to break the 89-89 tie — or so they thought. James chased Iguodala down and smacked the ball against the backboard, enabling the Cavaliers to gain possession and put themselves in a position to take the title. It was one of many memorable blocks by James.

Game 4 buzzer beater vs the Bulls

In game 4 versus the Bulls, the Cavs were a few seconds from being 3-1 down. The coach at the time, David Blatt, designed a play that required someone other than James to take the final shot. James wasn’t having any of it.

Talk about putting pressure on yourself. Anyway, he took the shot, sinking a three pointer to enable the Cavs to take victory in game 4 — and James to show why he’s the greatest player in the world. It was a masterclass in self-belief.

The years have rolled by and still James is writing history on the courts. During the NBA restart last year, he led the Lakers to a championship. But in this prolonged season, it has also been the year he passed Michael Jordan on the all-time scoring list, and a little later, he passed the late Kobe Bryant too.

LeBron James has cemented himself into the annals of basketball history as the greatest player of all time. Whether anyone will come to trump him is anyone’s guess, but anything can happen in the NBA. We’ll just have to wait and see and enjoy the journey along the way.

More in this category: « NFL Betting: The Essentials A Good Guide For Your First Time Casino Experience »