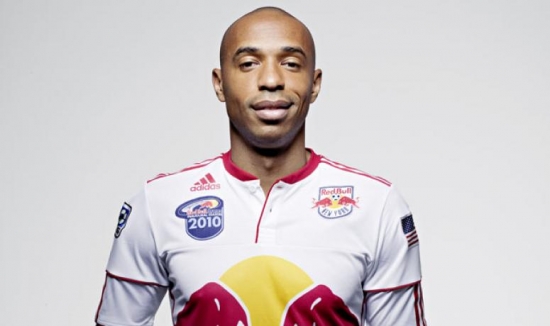 It’s perhaps easy to dismiss Thierry Henry’s time in the United States as nothing but a swansong following a glittering career at the summit of European football, but that would be a mistake. Henry ended up spending four and a half years with the New York Red Bulls and over that time he helped the side win their first trophy in 17 years.

That landmark day came back in October 2013 when the New York Red Bulls won the Supporters' Shield after a 5-2 win against Chicago Fire. Henry’s contribution was vast as the Frenchman scored one and assisted twice during the stunning romp to the regular-season title. In essence, if that fixture is a condensed version of Henry’s time in the States, he was by no means there to make up the numbers after he signed for New York in May 2010.

Over the course of those four and a half seasons in the Big Apple, Henry racked up 135 appearances whilst scoring 52 goals and assisting a further 42 times. Tellingly, the only clubs he spent more time at during his career were Arsenal and Monaco. In fact, Henry’s time in the US was so successful that his name has been included in the finalists for the National Soccer Hall of Fame's 2021 Class. The 43-year-old’s efforts are included under the criteria of ‘illustrious playing careers that involved significant MLS contributions.’

Whether Henry will ultimately be included remains to be seen but the very fact that the Hall of Fame’s selection committee is considering his admission speaks volumes given how exclusive this club is.

The World Cup-winning star didn’t let the grass grow under his feet when he arrived in America and single-handedly took the league into more homes around the world than ever before. One could even argue that Henry’s time in the MLS rivaled David Beckham’s in terms of putting the league on the map.

As it turns out, Beckham has also been drawn up alongside Henry in the 2021 list of potential inductees so perhaps we may find an answer to that question sooner rather than later.

Looking back, however, you have to admire how Henry, in particular, took to American culture so seamlessly which undoubtedly aided his on-field performances. There are a few memories that stick out but above all, who can forget the warm welcome the Frenchman received in 2017 upon his return to New York?

Henry was invited to throw the ceremonial first pitch at Citi Field in front of adoring New York Mets fans. It must be said, decibel levels are rarely that loud at Citi Field after a barren run that last saw the New York team win the World Series in 1986. Unfortunately, their MLB odds on bet365 suggest that trophy hiatus won’t end anytime soon with the Mets at 10/1 for a shot at World Series glory this season.

But perhaps this is the year for Henry and the Mets in their quest to pull off the impossible.

Henry has won the biggest soccer trophies everywhere he’s gone, from the World Cup to the English Premier League, the formidable French player has claimed them all but perhaps his crowning glory is still to come. An eternal place in the National Soccer Hall of Fame would cement his legacy as the MLS’s most prolific foreign import.

More in this category: « Does Popularity Affect Dating Life? NFL Betting: The Essentials »