(2016 American fly-on-the-wall documentary about the sex scandal that was Anthony Weiner
and its impact on his campaign for Mayor of New York City during the 2013 election;
directed by Josh Kriegman and Elyse Steinberg)
by Live Music Head 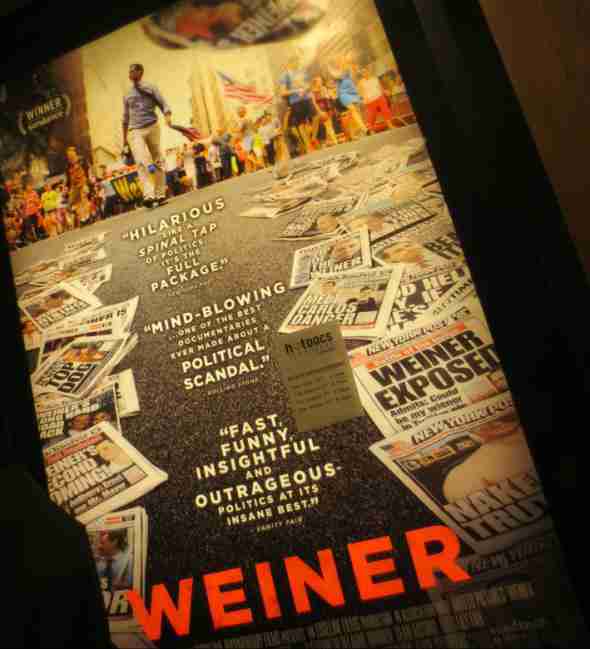 Went to the Hot Docs Ted Rogers Cinema tonight to see the new documentary film
about the American politician who got caught sexting photos of his cock
to women on the internet that he’d never met before. And it was highly entertaining!
But I knew it would be, as so is the trailer for it (posted below)
that made me want to see it straight away!

Unlike Donald Trump, the racist who is currently running for President of the United States,
or the racist and lyin’ scandalous joke that was Toronto’s Mayor Rob Ford,
I found this scandalous, lyin’, not-racist politician rather likable,
at least I did while watching him up there on the big screen.
Also known as “Carlos Danger”,
I’m of course talking about Anthony Weiner, who is, like he was at the time of the scandal,
still married to Huma Abedin (also likeable, and lovely!),
the aide to Hillary Clinton and Vice Chairwoman of her 2016 campaign for President.

Insert into the doc some of those great clips of commentary from Jon Stewart and Stephen Colbert:
“The truth came out… like a dolphin wiggling free of a blanket.”
And, “At least ‘Carlos Danger’ isn’t a ridiculous name like ‘Anthony Weiner’”,
(Marshall McLuhan: “The name of a man is a numbing blow from which he never recovers.”),
along with the theme song from that 1976 television series S.W.A.T., and yes,
this documentary is just like the promotional poster says: Hilarious!
“Like the Spinal Tap of politics, it’s the full package!”
And, “One of the best documentaries ever made about a political scandal.”
I say: "The Doc about the Cock" is a must-see for everybody!

Although it didn’t appear to be listed in the credits,
I could swear the song playing while they rolled was Kumbaya,
the song also known as “an appeal to God to come help those in need”.
Bluegrass-style!


Watch the trailer for Weiner here…

More in this category: « The Falls: a cautionary tale Multiple Maniacs »