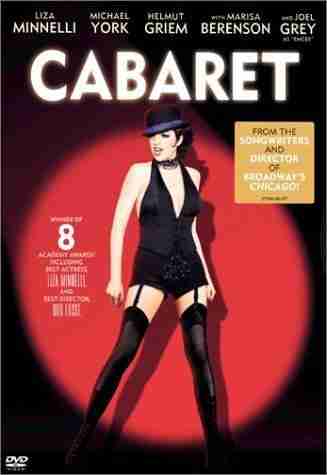 Possibly one of the greatest musicals ever made. Wait a minute! Is Cabaret really a "true" musical? Sure, it has incredible dance sequences in the German cabaret. The music and lyrics of all the songs are brilliant to say the least. And the direction of Bob Fosse constructs a beautiful path to connect story to song equivalent to few films in the history of musicals. However, the background setting of Nazi Germany in the early 1930s in power, the overtones of strong anti-Semitism, and the overpowering liberal sexuality both in the cabaret and the outside storylines, create a dramatic atmosphere in which the music of the film only exemplifies.


The film on all terms is superb. The acting is all very expressive (even including the usually extremely dull Michael York as the sexually inactive Englishman in his fish-out-of-water character). Liza Minnelli is outstanding as the American star wannable. Her portrayal of Sally Bowles won her an Academy Award for best actress in 1972. However, one performance stands out above the rest. Probably one of the top 5 greatest supporting roles in the history of movies, Joel Grey's perfomance as the cabaret emcee (he too won an Oscar for Best Supporting Actor). His outlandish dance sequences and over-the top characterization of a showman gives his audiences extreme pleasure as well as harmlessly poking fun of society, while literally at the sme time just outside the doors of the cabaret, the world is in turmoil.


When you catagorize this movie as a musical or drama, you cannot avoid the fact that in a moving two-plus hours this film will make you sing, dance, bring you to tears, and most importantly think about the horrifying Nazi power in the 1930s, all at the same time. It was a shame that the American Film Institute (AFI) didn't recognize this film in their top 100 films. It should be in the upper echelon among the greats.

Cabaret fits right in with the tradition of Hollywood musicals that use the musical numbers to accent and emphasize dramatic points. The Sound of Music, which also has a Nazi theme running through it, might have fluffy numbers but its story is a serious one (and based on a true story too). Once you look past the love story, South Pacific has a darker undercurrent of racism ("You Have to Be Carefully Taught"). Even the effervescent Singin' in the Rain is the story of the end of silent films. (And don't forget that the title song became a key plot point in A Clockwork Orange.)

In Cabaret, the two linchpin songs are "Tomorrow Belongs to Me" and "If You Could See Her (the Gorilla Song)." The former really marks the moment when the film moves from casual decadence to incipient menace as the Aryan youth inspires the beer-garden crowd to fits of quietly frightening nationalism with his seemingly innocuous song, while Fosse and his terrific cinematograp her Geoffrey Unsworth (he worked with Stanley Kubrick on 2001: A Space Odyssey, among other plum gigs) give the scene a deceptively glowing soft focus.

Meanwhile, the latter song is probably the most moving and poignant of the John Kander-Fred Ebb songs used in the film, with Grey's performance surprisingly emphasizing his ambivalence about the coming New Order--he gives every indication otherwise up to then.

And, yes, Grey's is a brilliant performance- -but one of the top five supporting performances of all time? You might be right, but by now I'm always skeptical of such claims because when you think about it, you'd have to have seen just about every movie ever made in order to fairly assess all performances . What are some of your other top performances ? That will give us a baseline.

Otherwise, I certainly agree with your view about Cabaret. I give it five stars out of five. By the way, Cabaret wasn't on AFI's 1998 list of "100 years . . . 100 movies," but it did make the 2007 version of the list at Number 63, and it is listed at Number 5 on AFI's list of "Greatest Movie Musicals."
Quote
Refresh comments list
RSS feed for comments to this post