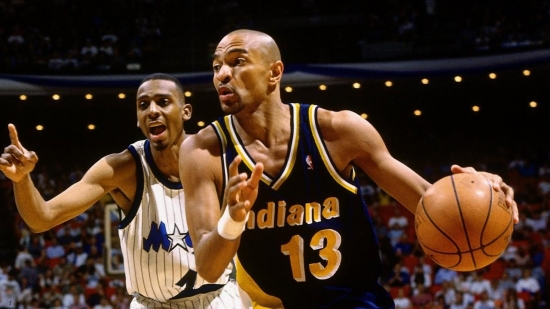 Mark Jackson was a former Rookie of the Year (1988) and was an All-Star in 1989 when he was the New York Knicks, and after a stint with the Los Angeles Clippers, he was traded to the Pacers where he would take over as their starting Point Guard before the 1994-95 season.

Jackson played there for two seasons where he averaged at least 7.5 Assists per Game in each year with a 10.0 PPG in the second year.  Jackson was sent to the Denver Nuggets before the 1996-97 Season, but feeling that the team lacked chemistry without him, they would re-acquire him in February of that campaign.  In that combined season with Denver and Indiana, Jackson would lead the NBA in Assists per Game (11.4), and in the three years that followed, he would average more than 8 Assists per Game.

Jackson’s run with Indiana ended when he signed with the Toronto Raptors in 2000.  His overall stats with the Pacers would see him average 8.4 Points and 8.1 Assists per Game.