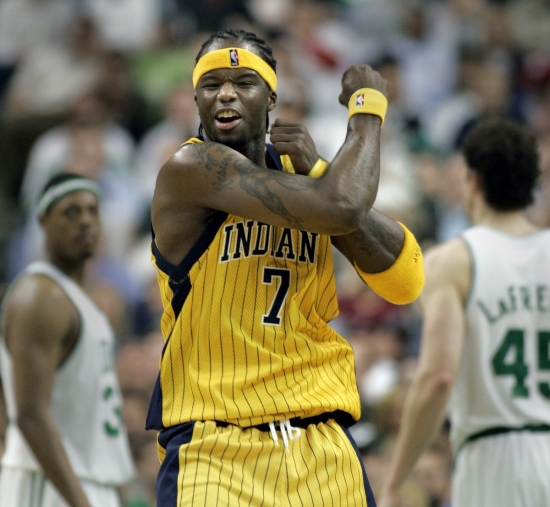 The Indiana Pacers fanbase were scratching their heads when their team traded for Jermaine O'Neal and gave up Dale Davis to get him.  O'Neal had been in the NBA for four years and only started 18 Games for Portland, averaging only 11.5 Minutes per Game, so why would they trade for him?

Indiana made O'Neal a starter where the Power Forward would average 12.9 Points, 9.8 Rebounds, and 2.8 Blocks per Game en route to winning the Most Improved Player of the Year Award.  In addition to his stellar defense, O'Neal would become the team's top scoring option.  In the next three seasons (2000-01-2003-04), he would average a double-double, capable of 20-10 nights regularly.  The Pacers were top contenders in the East, with O'Neal playing a large part of that, but injuries began to reduce his playing time.   He was also one of the suspended players at the "Malace in the Palace” brawl against the Detroit Pistons, where he went into the stands in support of his teammate, Ron Artest, who went into the crowd after having a drink thrown at him.  That, and the mounting injuries would take their toll on O'Neal, but he was still a very good player who was still averaging over 20 Points per Game.

Overall, Jermaine O'Neal would represent the Indiana Pacers in six All-Star Games with averages of 18.6 Points, 9.6 Rebounds, and 2.4 Blocks per Game.  Had the Malace at the Palace never happened, could the trio of O'Neal, Miller, and Artest have won a title?  We’ll never know, but we know that O’Neal was a damned good basketball player.