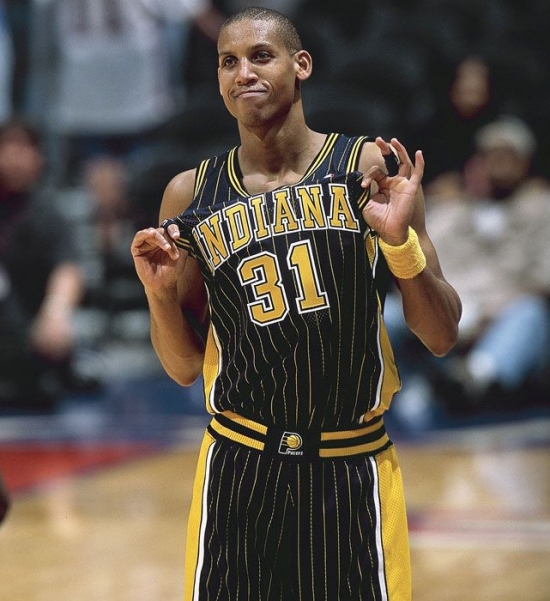 It's so strange to think about this now, but when the Pacers chose Reggie Miller with the 11th Overall Pick in 1987, Indiana’s fans were upset that they bypassed local star, Steve Alford.  It didn’t take them long to get over that frustration as Miller would emerge as one of the greatest shooters the court has ever seen.

While Miller never won the NBA Championship, he is the owner of one of the most incredible post-season moments of all-time.  The Pacers developed a heated rivalry with the New York Knicks, who beat them in the 1994 Eastern Conference Finals.  Miller was phenomenal in the series, shooting rainbow threes to the dismay of Spike Lee, but as mentioned, the Knicks prevailed that year.  They met again in 1995, this time in Eastern Conference Semi-Finals, where the result was different.  In Game 1, the Pacers were down six points with 18.7 seconds remaining, and Miller would shoot a three to cut the lead in half.  He would then steal the inbound pass from Anthony Mason and drained another from downtown.  Miller would be fouled on Indiana's next possession, where the superstar sank both shots.  He scored 8 Points in 8.9 seconds, and they would go on to win the series.  It wasn't until the year 2000 when Miller could finally reach the NBA Finals, where they would go down to defeat to the dominant Kobe Bryant, and Shaquille O'Neal led Los Angeles Lakers team.

Miller may not have won an NBA ring, but he certainly did everything he could to help the Pacers win one.  Without Miller, they never would have come as close as they did.

He would retire as the all-time leader in Three Pointers, though Ray Allen has since surpassed this.

Miller was inducted into the Naismith Basketball Hall of Fame in 2011.

More in this category: 2. Mel Daniels »