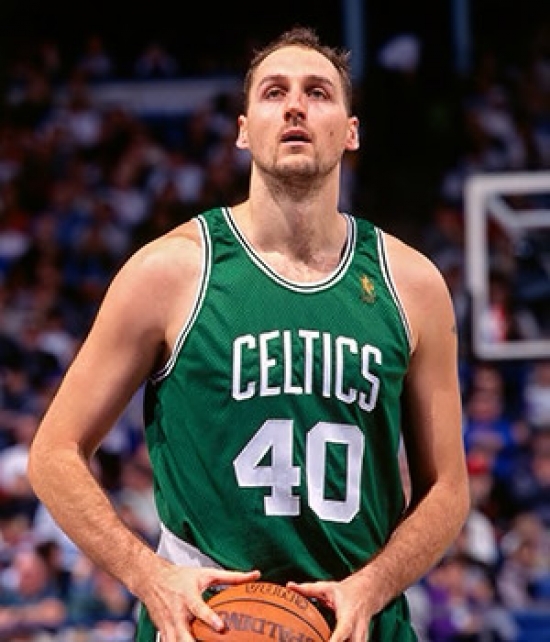 The Boston Celtics drafted the Yugoslavian born, Dino Radja in the 2nd Round of the 1989 Draft but it took until the 1993-94 season that the Power Forward elected to leave Europe to play in the United States.

Playing at Power Forward, Radja’s European style would befuddle many an American defender, and in his debut season, he would average 15.1 Points and 7.2 Rebounds per Game.  His numbers would gradually increase over the following two seasons with his Points rising to 17.2 and 19.7 with his rebounding also rising to 8.7 and 9.8 respectively over the next two seasons.  A knee injury took him out of most of the 1996-97 season, and when new coach, Rick Pitino came in, he was traded to the Philadelphia 76ers.

If you don’t remember Radja in a Sixers uniform, it is because he never played there.  Radja flunked the physical, citing a lack of cartilage in his left knee.  The Celtics arranged a buyout of Radja’s contract, and he would return to Europe, specifically with Panathinaikos of the Greek League.   He would then go on to be one of the most successful players in European history.

Radja would enter the Naismith Basketball Hall of Fame in 2018 vis the International Committee.