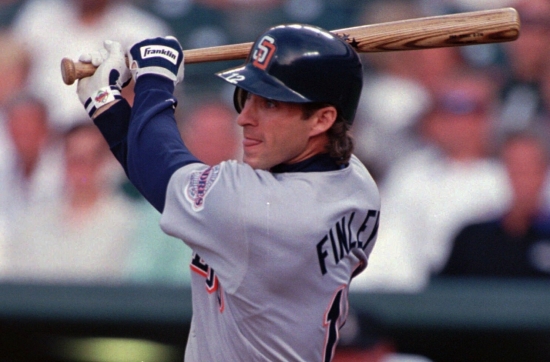 Steve Finley played for eight Major League Teams, the third being San Diego.  While it can be stated that Finley proved his worth as a potential All-Star as an Astro, it was with the Padres where he proved it.

Finley was traded from Houston along with Ken Caminiti and many others going into 1995; he batted over .290 in his first two years, showed increased power numbers, belting 30 Home Runs in 1996, and was tenth in MVP voting.  Finley made the All-Star Game for the first time in 1997, and though his 1998 numbers were weaker, Finley showed his merit.  He left as a Free Agent for Arizona in 1999.

His inconsistent defense hinders Finley's rank, and while he won two Gold Gloves as a Padre, the advanced metrics did not warrant it.  Nevertheless, as a Padre, Finley had 662 Hits, 82 Home Runs, and batted .276.