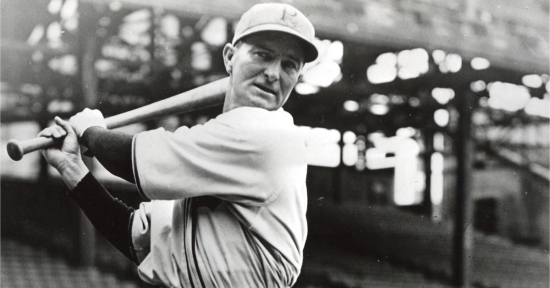 The 1920s brought us the Home Run era that we still enjoy today, but spray hitters have never gone out of style.  One of the best was Paul Waner.

Waner learned how to bat by hitting corncobs from Oklahoma, but that is not the most unique part about developing his skills.  Waner had poor eyesight, specifically due to astigmatism, and he learned how to hit the blurry baseballs in the middle.  Unique as it was, it worked, and he tore it up in the Minors and would land a job in Pittsburgh in 1926 as their Rightfielder.

Waner had a terrific rookie year, leading the NL in Triples (22) with a .336 Batting Average.  As an MLB sophomore, Waner had his best year as a professional, topping the league in Hits (237), Triples (18), RBIs (131), and Batting Average (.380).  Waner rightfully won the MVP, and although we will argue this was his peak campaign, it was not his last excellent one.

Over the next ten years, Waner could be counted on to produce Hits, Runs, and a high Batting Average.  From his rookie year in '26 until 1937, Waner never finished a year with a Batting Average lower than .300, and he won two more Batting Titles (1934 & 1936) to add to the one he captured when he was an MVP.  Waner had nine years with over 100 Runs (including two league-leading years), was a two-time Hit leader, and two-time leader in Doubles.  He never did capture a second MVP, but he was in the top five three times.

As Waner got older, his skills slipped, and the Pirates traded him to Brooklyn during the 1940 Season.  He played five more years, but had he never played baseball after Pittsburgh, Waner would have been Cooperstown-worthy.  With the Pirates, he had 2,868 Hits, with a Batting Average of .340.

Waner was chosen for the Baseball Hall of Fame in 1952, his seventh year on the ballot.

Buy your Tickets to see Pittsburgh Pirates at Cincinnati Reds at Great American Ball Park in Cincinnati, OH HERE for as little as $260!

Buy your Tickets to see Pittsburgh Pirates at Cincinnati Reds at Great American Ball Park in Cincinnati, OH HERE for as little as $55!

Buy your Tickets to see Pittsburgh Pirates at Cincinnati Reds at Great American Ball Park in Cincinnati, OH HERE for as little as $56!