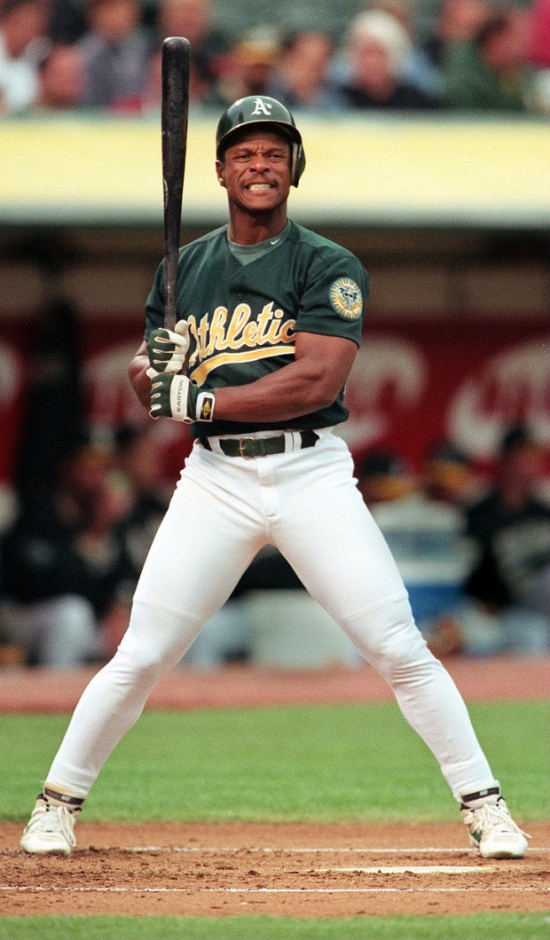 He is all of those things.

Despite all of the other teams he played for (New York Yankees, Toronto, San Diego, Anaheim, New York Mets, Seattle, Boston, and Los Angeles), he is one other thing: an Oakland Athletic.

Henderson debuted for Oakland in 1979, and in 1980 he would set the American League Stolen Base Record with 100 while going to his first All-Star Game.  The following season was strike-shortened, but Henderson was again the Stolen Base leader (56) and would lead the AL in Runs Scored (89), Hits (135), and he was the runner-up for the American League MVP.  He would also earn his only Gold Glove this year and received his first Silver Slugger Award.

The fleet-footed Outfielder would break the AL record for Stolen Bases that he set in 1980 with a 130 SB season that set the standard regardless of the league.  He would have another 108 Stolen Bases in 1983 and 66 in 1984, both of which were league leading.  Henderson also established himself as a solid hitter who, in his first five full seasons (1980-84, not counting 1979), never had an On Base Percentage under .398.  This was an impressive run, but this came to an end when he was traded to the New York Yankees before the 1985 season, but this was still the beginning and not the end.

Henderson was traded back to Oakland during the 1989 season, and the A’s, who were already loaded with talent, were going for it all.  Henderson helped Oakland win the World Series that year, which would be the only one he would capture as an Athletic.  He would have his best season ever in 1990, where he won the MVP by hitting a career-high 28 Home Runs and leading the AL in Runs Scored (119), OBP (.439), OPS (1.016) and would bat .325.  The Athletics went to World Series that year but were shocked by the Cincinnati Reds, who swept them in four games.  Henderson remained strong for Oakland but was traded to the Toronto Blue Jays midway through the 1993 season, and he would help them win the World Series.  In the off-season, he resigned with Oakland.

This period would begin his nomadic run, as he was with A's for only two seasons and would sign with the Padres as a Free Agent after.  He came back in 2008 for his fourth run, which lasted only one season, though it was a good one that yielded his last Stolen Base title.

As of this writing, he is the all-time leader in Runs Scored (2,295) and Stolen Bases (1,406), much of which was accumulated in Oakland, which, as you saw above, was an awful lot!

Henderson would be chosen for the Baseball Hall of Fame in 2009.