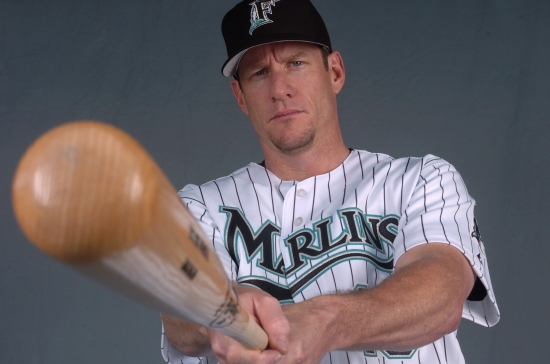 In an earlier entry, we mentioned that Luis Castillo is one of three Marlins to have won both of the Marlins’ World Series titles, but only one of the three was a starter in both.  That man in Jeff Conine.

Conine would become an original Marlin, taken in the Expansion Draft from Kansas City after appearing in 37 Games for the Royals.   He would become a starter at Leftfield for the Marlins, participating in all 162 Games and finishing third in National League Rookie of the Year voting.  Conine had 174 Hits that year, a career-high, but he was a more complete player over the next two seasons, going to the All-Star Game in both years with .300 years.  Conine belted at least 25 Home Runs in 1995 and 1996, and he was established as one of the better players on the Marlins roster.

1997 was a strange year in Baseball, mainly because the Marlins, a team that was only in existence for four years, winning it all.  Conine had his weakest year to date, but he was a solid part of their championship.  The Marlins unloaded all of their stars, including Conine, who was sent to Kansas City.

Late in the 2003 Season, he was traded back to Florida (this time from Baltimore), and he helped them win their second World Series Title.  Conine played for the Marlins until he rejoined the Orioles as a Free Agent after the 2006 Season.