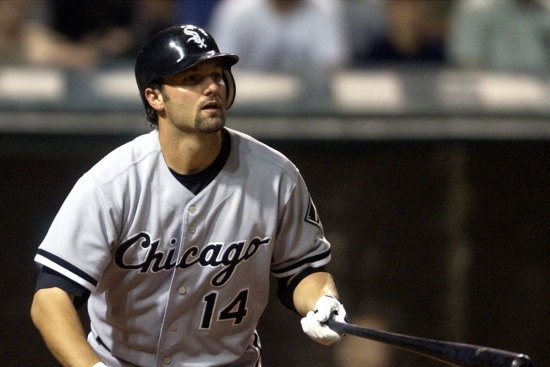 Konerko came to Chicago on a one-on-one trade for Mike Cameron, and with all due respect to Cameron, the White Sox got the better end of the deal from Cincinnati.  In his first year in Chi-Town (1999), Konerko became a starter at First Base, and he showed the White Sox fans exactly what they could expect for the next decade and change.  He had 24 Home Runs with a .294 Batting Average, and he followed that up with similar numbers in the years that followed.

The First Baseman would make his first All-Star in 2002, and in 2004, he had his first of two straight 40 Home Runs campaigns.  2005 was especially gratifying, as not only would he make his second All-Star Game, he would win the World Series MVP bringing the White Sox their first title since 1917.

That may have been his only World Series Ring, but Konerko continued his strong offensive numbers, amassing four more 30 Home Run Seasons, and he would add three more .300 years to the one he already had in 2002.  Konerko went to six All-Star Games and would twice finish in the top ten in MVP voting.

The knock against Konerko was that he could be strikeout prone, grounded into double plays too often, was slow on the base paths, and was weak on defense.  That is quite a bit, but 432 Home Runs, 2,292 Hits, and a Slash Line of .281/.356/.491 as a White Sox will make fans forget about that very easily.

We guess that is why they retired his number #14, and there is a statue of him outside of their stadium!