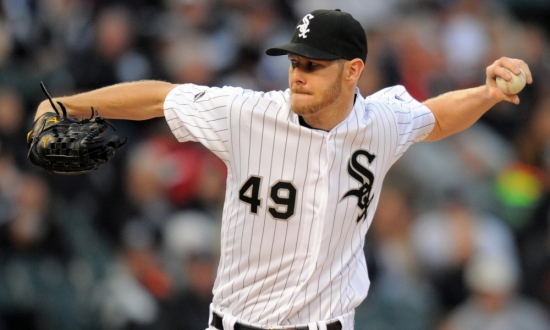 Nicknamed the “condor” for his condor-like delivery, Chris Sale played his first seven games in the Majors with the Chicago White Sox.

He didn’t waste time arriving in Chicago, as he debuted with the White Sox the same season he was drafted (2010).  He would pitch from the bullpen, appearing in eight games, and would stay on the roster the entire for 2011, where he threw in 58 Games and had eight saves.  That was good, but the White Sox had bigger plans for the first round pick.

In 2012, Sale was moved to the starting rotation, where he brought a blistering fastball and a lethal slider to a more substantial assortment of batters.  He went 17-8 with 192 Strikeouts, finishing fourth in bWAR for Pitchers (5.7) and ERA (3.05), and went to his first All-Star Game, which would begin a streak of seven consecutive.  The Chi-Sox had an ace, and he would put up comparable numbers in the five seasons he was a starter in Chicago.

From 2013 to 2017, Sale would always finish in the top five in Cy Young voting, had at least 200 Strikeouts, and was in the top ten in bWAR for Pitchers, ERA, and WHIP.  That is a pretty good baseline, so you can imagine that there were some increases on that already impressive mark.  With his vast repertoire, Sale struck out a lot of batters, and he would lead the American League with 274 Ks in 2015.  As he also had good control, his SO/BB was exemplary.  He finished first in 2015 (6.52), and as of the end of the 2019 season, he is the all-time leader in that stat.

Sale was dealt to the Boston Red Sox after the 2016 season, as Chicago looked to rebuild.  Sale would help Boston win the 2018 World Series.