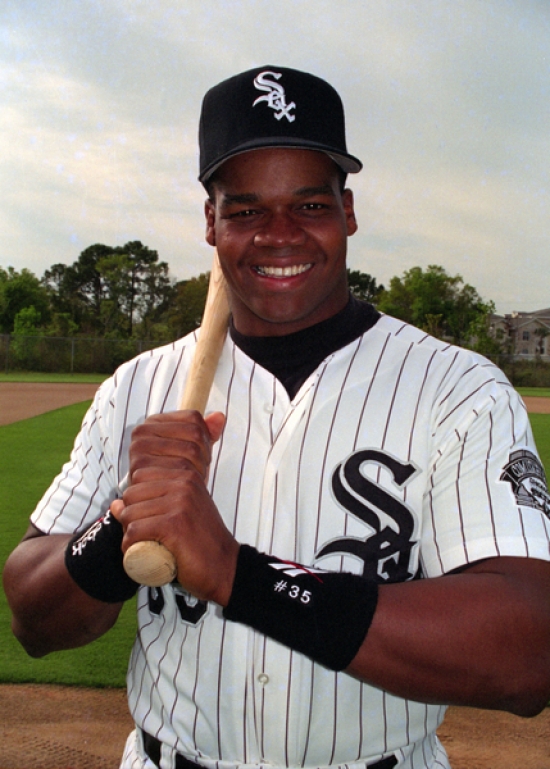 Let's begin by saying that this was not as much a runaway choice as we initially thought it would be.  As you scroll through the next few options, you will see why, but in the end, we decided that Frank Thomas is the greatest player in Chicago White Sox history.

With one of the best nicknames in all of North American Sports ("The Big Hurt"), Frank Thomas made his Major League debut with the Sox in 1990, where he played in 60 Games, and that would give everyone a taste of what would come in the 1990s.

From 1991 to 1997, Thomas was one of the best hitters in baseball, showing a high Batting Average, strong plate discipline, and power.  In every one of those years, he batted at least .300, had an On Base Percentage of .425 and had a Slugging Percentage of minimum .530.  In six of those seasons, Thomas had an OPS over 1.000, and in the one year he didn't (1992), he still led the American League.  In this stretch, he had one Batting Title, four On Base Percentage Titles, and one Slugging Title with four OPS wins.  He would also have three 40 Home Run seasons, and would never have less than 100 Runs Batted In.  During that seven-year run, Thomas never finished lower than eighth in MVP voting, would have two third-place finishes, and won the award in 1993 and 1994.

By the end of the 90s, Thomas was primarily used as the team's Designated Hitter.  His average began to dip, but he would still perform well.  The slugger had two 40 Home Run seasons in the 2000s for Chicago, with the first one (2000), seeing him set a personal best with 143 Runs Batted In.  He was second in MVP voting that year.

The apparent knock on Thomas was that he was a poor fielder and he played DH more than he played in the field, but when you could hit as he did in his prime, it is so easy to forgive.

Thomas entered the Baseball Hall of Fame in 2014, his first year of eligibility.