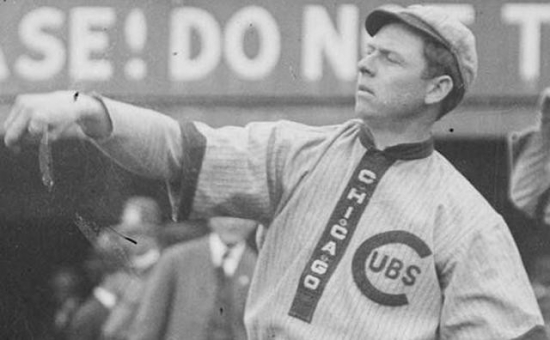 If you didn't agree that Fergie Jenkins was the best Pitching Chicago Cub, then we guess that it was Mordecai "Three Finger" Brown that you would give that title too.

Nicknamed "Three Finger" because of a farm accident that cost him parts of two of his fingers, Brown used that disability to develop a wicked curveball that went along great with his accuracy.  Brown arrived in the city of Chicago from a trade from the St. Louis Cardinals, and in 1906 he moved into the highest tier of hurlers with a 26 and 6 season, and league leading 1.04 ERA and 0.934 WHIP.  Brown again won 20 Games in 1907, but this time would pitch the Cubs into a World Series Title and would do so again in 1908.  In those two Fall Classics, he would not allow a Run over 20 Innings Pitched.