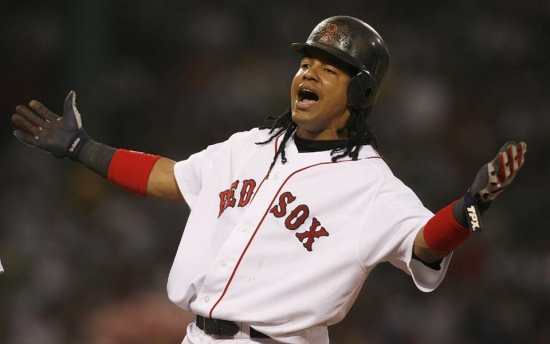 That happened long before he signed with the Red Sox, after being a four-time All-Star with the Cleveland Indians, but it was at Fenway where the baseball world really began to see him on a national stage.

Ramirez was an All-Star every season that he was with Boston, and he remained a spectacular power hitter.  In all of his seven full seasons with Boston, he would have at least 33 Home Runs, winning the Home Run Title in 2004.  Six times, he had at least100 Runs Batted In, and the lowest he ever batted was .292, winning the Batting Title in 2002 with a .349 metric.  He knew how to work the count, winning three OBP Titles, with the lowest he ever finished in a Boston uniform, seeing him finish at .388.  In 2004 and 2005, he was in the top four in MVP voting, and was in the top ten, the three seasons before that.

As you know, this was the time where Boston returned to the top rank of American League baseball.  Ramirez helped them win the 2004 and 2007 World Series, winning the 2004 World Series MVP.  With the Red Sox, he had 11 post-season Home Runs with 38 RBIs.

The end of Ramirez's career in Boston has to be documented.  While still an excellent player in 2008, his antics wore thin with his teammates, management, and fans alike.  Ramirez had a brawl with his teammate Kevin Youkilis, and he pushed the 64-year-old Travelling Secretary, due to the latter's inability to get 16 comped tickets.  He began to dog it on the field, and despite his high level of offensive skill, the Red Sox traded him to Los Angeles.  The transaction would be the correct decision, as he would later be suspended twice for PEDs, and was never close to being an All-Star again.