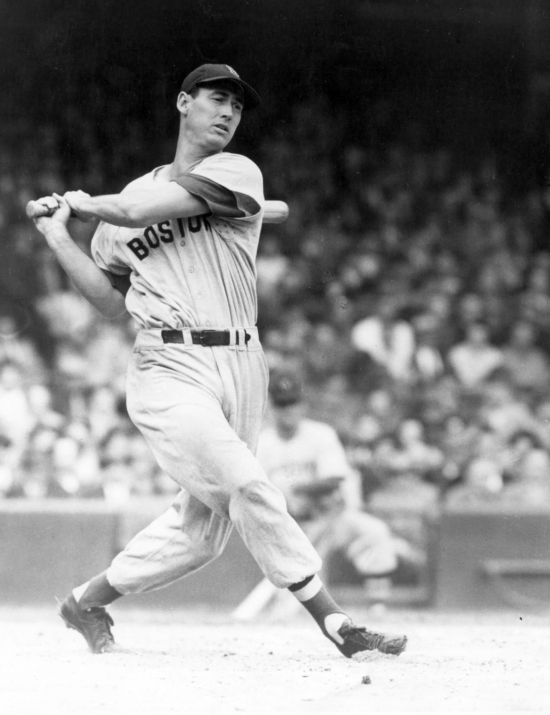 As incredible as Ted Williams was, it is lost a bit, as to just how good he was.  Part of this because so much time has passed; part because his Red Sox only won one American League Pennant.

Ted Williams played his entire career with the Boston Red Sox (1939-60) save for three years, where he was in the U.S. Military for three years during World War II (1943-45).  Nicknamed "The Splendid Splinter," Williams batted .327 with 31 Home Runs and an American League-leading 145 RBIs as a rookie.  This season was the perfect showcase for what the baseball world could expect from Williams, as before the War, he went to his first three Run Scored Titles (1940-42), two Batting Titles (1941-42), OBP Titles (1940-42) and Home Run Titles (1941-42).  Williams' first Batting Title would see him bat .406, which is to date the last time a player hit the magical 400 mark.  He swept the Slash Line and Home Run Titles in both ’41 and ’42, but amazingly he was not named the MVP in either season (despite leading the AL in bWAR).  He was the runner-up in 1941 to Joe DiMaggio, who had the 56 Game Hitting Streak, and in 1942 to Joe Gordon.  The Yankees won the Pennant in both of those years.

Williams returned in 1946 and retook his place as the game's top hitter.  From 1946 to 1950, he won two Batting Titles and was the AL leader in OBP and Slugging Percentage.  He also earned his third and fourth Home Run and RBI Title, which would be the last of his career.  His two American League MVP Awards happened during this time (1946 & 1949), and the two he did not win, saw him finish in the top three in voting.

As mentioned earlier, Williams was only able to take Boston to World Series Championship.  Still, when you are going up against the New York Yankees, who had legends like DiMaggio, Mantle, Berra, Rizzutto, to name a few, that should never be held against him.  Williams was also not very fast and not a great defensive player, but when you hit at his level, nobody should notice.

More in this category: 2. Carl Yastrzemski »