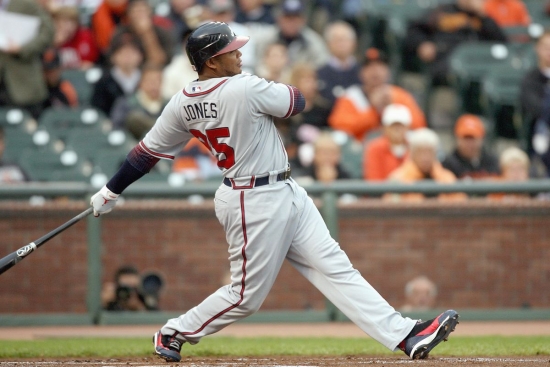 From Curacao, Andruw Jones made his debut with the Braves at age 19 and it was clear from the beginning that this was a star in the making.  Jones would have his first 30 Home Run season in 1998 and from 2000 to 2003 he would hit that mark with three 100 RBI seasons and a .300 season in 2000, which surprisingly was the only one he ever had.  Jones would add to his already prolific power numbers in the 2005 season where he had a league leading (and career high) 51 Home Runs and also was the champion in Runs Batted In with 128. For his efforts he was the runner-up for the National League MVP.  His overall power totals for the Braves would be an impressive 368 Home Runs, 1,117 RBIs with a .497 Slugging Percentage.

No conversation about Andruw Jones can take place without discussing his incredible defensive abilities.  Jones would win the Gold Glove every season from 1998 to 2007 (all with Atlanta) and he had six straight years where he would finish first in Total Zone Runs (1997 to 2002).  As a Brave, he was the NL leader in Defensive bWAR and in six other seasons he was in the top ten.

Had Jones had a better Batting Average and OBP (.263 and .342 are decent but not spectacular) he would be higher on this list.