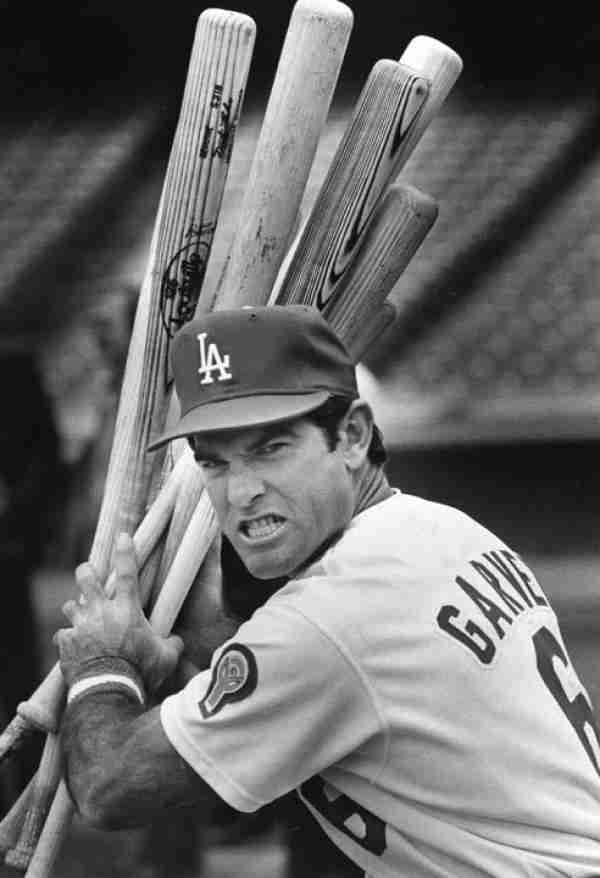 The common trend in Baseball Hall of Fame voting is for a solid candidate to get a healthy double-digit vote in his first year of eligibility and watch that number climb slowly as more and more perspective is put on their career.  For Steve Garvey, the more the Hall looked at his career, the more they seemed to talk themselves out of his induction as evidenced by the way his votes were cut in half from his first year (41.6) to (21.1) in his last year.

There is a good chance that if you were a fan of the L.A. Dodgers in the 70’s you were a huge fan of Steve Garvey.  It would be easy to see why as his squeaky clean image and model good looks were combined with a perennial All-Star who hit for a solid average, had moderate power, was great in the clutch, and was the Iron Man of his generation.  Garvey won the 1974 NL MVP, 1978 NLCS MVP, and two All-Star Game MVPs.  Basically, if the camera was on Steve Garvey, he produced.

Perhaps that was the problem.  Garvey was more concerned at times with looking good than playing good, and he would rather swing away than take a deserved walk which did not play well for TV.  Garvey also may have been a four-time Gold Glove recipient at first, but he was a failure at third base.  Garvey may have been an Iron Man playing in a lot of consecutive games but it may have been at the detriment to his team.  Bottom line is that stories of his selfishness have emerged as frequently as stories of his infidelity did after his playing days ceased.

We like to build heroes and tear them down so that we can build them up again.  Steve Garvey may have rejected on his first go around but it is possible that he will be built up again for consideration by the Veteran’s Committee.

0 #8 Jeff Zoerner 2020-12-20 17:33
Big Steve Garvey fan growing up. In my opinion, he's another example of a very good player whose career stats didn't quite measure up to HOF standards. For a first basement, his OBP, slugging, and HR figures just fall short. Although I agree with the people who are saying he was as good as Tony Perez.
Quote
+1 #7 Chuck Peterson 2015-08-16 03:22
I've read that personality conflicts is a reason why he was not considered. Is the HOFC voting on talented production or sociability achievements ? His stats are a solid HOF.
Quote
0 #6 CHATOGRAPH 2015-07-20 16:35
Steve Garvey certainly deserves to be in! We've started a FB page Steve Garvey In Cooperstown if you want to chat about it and support #6. All of the reasons stated here are proof The Iron Man deserves in!
Quote
0 #5 Darryl Tahirali 2015-02-06 03:22
Hey, Flunk. I didn't miss that. What does it prove? Garvey's qualified for the Hall of Very Good?
Quote
+1 #4 FrankW 2014-08-20 06:58
Hey Durrel. Maybe you missed it. In addition to all time record for consecutive games:

I agree that Perez was overrated, benefited from playing on teams that put lots of baserunners on for him to drive home, and owes his undeserved Hall of Fame status to being part of the Big Red Machine. But I also think that Garvey was roughly comparable to Perez and similarly doesn't belong in the Hall.

Yeah, the nerve of those stat nerds with the propeller beanies, thinking that the quantitative and qualitative measure of a player's performance might actually determine whether he might be a Hall of Fame player. What nonsense!

So, why don't you naysayers give us the convincing argument as to why players like Garvey (or even Perez) are Hall of Famers? Is it because they were "clutch hitters"? The "most feared hitter in the league"? That they simply "carried themselves like a Hall of Famer"? For those who didn't "follow baseball in the '70s," give them the "truth."
Quote
+1 #2 jimmy26 -0001-11-30 00:00
The hall of fame is a joke to have Tony Perez in and Steve Garvey not in. Anyone who followed baseball in the 70's knows the truth. This nonsensiscal statistical love affair everyone seems to have blinds us from us the reality of who really was great. Tony Perez was at best the 4th best player and very possibly 6th in a great lineup. he batted behind great p;layers and thus drove in runs. he alos switched over to the american league to accumalate some late in the career statistics as a dh. Steve Garvey was the best player on the Dodgers. and the Padres. heck he almost singlehanded ly carried the Padres to a world series in one of the most epic series ever keeping the Cubs at home. His squeky clean image did take a hit but who cares. He deserves to be in more than about 32 of the guys before him on this list including mr 1C please quit drinking the cummalative stat koolaid and start looking at how good the players really were.
Quote
+5 #1 dlrratedr -0001-11-30 00:00
Garvey's one of those players people like to tear down and devalue. Seems to be en vogue these days to tear down the Garvey's Jim Rice's, etc. At the same time trying to manufacture and build cases for players like, well, Jimmy Wynn. Garvey deserves the HOF more than most on this list. Tremendous player for the bulk of the 70's.
Quote
Refresh comments list
RSS feed for comments to this post