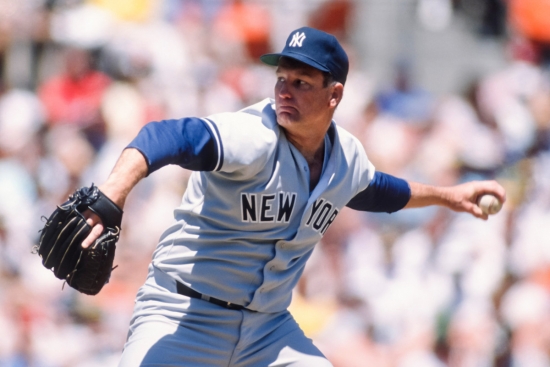 We imagine that there are younger baseball fans that are oblivious that there really was a Tommy John and that it was not just the name of a surgery.  This would be unfortunate, as Tommy John has to go down as one of the most durable pitchers in baseball history.

Likely the most amazing statistic about Tommy John is that he lasted twenty-six seasons.  Considering that he missed a season and a half due to arm trouble, it would have been expected that his career would not be a long one.  Not only did he come back from revolutionary surgery to repair his tendon (what we become known as “Tommy John” surgery) but he would post his most productive period of his career where he won twenty games three times in four years and was a Cy Young contender for tthat aforementioned four-year span

John was an effective sinkerball pitcher using his control to get batters out on the ground rather than put it past them.  This isn’t to say that he couldn’t strike out batters, but he was not among the leaders in that category.  Had Tommy John been more of a strike out pitcher (which is far sexier stat) or been part of a World Series win he may have received more votes.  As his overall career numbers are similar to that of Bert Blyleven who finally made it to Cooperstown, a very strong case could be made by the Veterans Committee for Tommy John.

Should Tommy John be in the Hall of Fame?

Should Tommy John be in the Hall of Fame?

I thought that Bert Blylevin was a marginal player who compiled a lot of stats simply because he played a long time and it astounds me that anyone considers Blylevin to have ever been a great pitcher. However, if Blylevin is somehow worthy of the Hall, then Tommy John is also deserving.

I agree with you that Blylevin was not HOF material... I also don't think Tommy John should be there. I don't subscribe to the "If A is in, then B should be there , too" argument that many use; I understand it, but don't agree with it because it leads to too many people being in who don't belong there.
Quote
0 #6 Darryl Tahirali 2016-07-18 23:07
Quoting nick lewis:

Darryl what you fail to mention is that not only did john have one more win he had 19 fewer losses also allowing 81 less earned runs and bert gave up a staggering 128 more home runs, 63 more walks and hit 57 more batters.

Yeah, they both can go tit-for-tat depending on the stats.

Take FIP, fielding-ind ependent pitching, which looks at how good a pitcher is at preventing HR and BB and at causing SO. John's FIP is 3.38, which is a few ticks over his 3.34 ERA. Blyleven's FIP is 3.19, several ticks below is 3.31 ERA--this despite, as you say, walking more hitters and giving up many more gopher balls.

John had more appearances and more starts in four more seasons than did Blyleven, yet John pitched 259.2 fewer innings--tha t's more than a full season as a starter these days. And Blyleven had 80 more complete games.

Qualitatively and quantitative ly, Blyleven is a Hall of Famer and John was an effective compiler. Question: Were John not a lefty, would he have found work in MLB up to age 46? I don't know, but doubtful.
Quote
+1 #5 nick lewis 2016-04-20 22:07
Darryl what you fail to mention is that not only did john have one more win he had 19 fewer losses also allowing 81 less earned runs and bert gave up a staggering 128 more home runs, 63 more walks and hit 57 more batters.
Quote
-1 #4 nick lewis 2016-01-16 14:53
what about his wins. that alone should get him in
Quote
+1 #3 Kurt 2015-06-09 16:58
I thought that Bert Blylevin was a marginal player who compiled a lot of stats simply because he played a long time and it astounds me that anyone considers Blylevin to have ever been a great pitcher. However, if Blylevin is somehow worthy of the Hall, then Tommy John is also deserving.
Quote
+3 #2 John Smith 2015-04-30 01:47
Were in not for the time lost due to the surgery that know bears his name, John would have reached the magical 300 wins milestone,
Quote
0 #1 Darryl Tahirali -0001-11-30 00:00
A friend and I have this conversation periodically : whether Tommy John belongs in the HoF. He uses the same similar-to-B lyleven argument as well, and superficiall y it's not bad. Both are very similar in wins and ERA, but I think that's about as close as it gets.John was a very good pitcher, and because of the famous surgery, he was a remarkably durable one as well. But unlike Blyleven, John doesn't have any distinctive rankings except for shutouts, for which he is tied for 26th all time. Blyleven is ninth in shutouts--an d fifth in strikeouts.W hen you look at the advanced stats, John is 43rd in pitcher WAR (Baseball Reference version) with 59.00, right around Jim Bunning, Jerry Koosman, and Luis Tiant, among others. Not bad company--but Blyleven is 13th with 90.10, just ahead of Christy Mathewson, Bob Gibson, Nolan Ryan, and Steve Carlton. Which of those sets of neighbors would you want in your rotation? ERA+ shows John ranked below 300th with 111 while Blyleven is 142nd with 118. John is 101st in adjusted pitching wins, with 18.39--but there's Blyleven in the number-19 spot, with 36.09.Whethe r you like the newfangled stats or stick by the old ones, John and Blyleven are close only in wins and ERA. In fact, John has one more win than does Blyleven. So what? Wins are a team statistic, and there are too many factors out of the pitcher' s control to make it meaningful. ERA might be a better measure, and they're virtually identical. But when you look at both the career leaderboard and the advanced stats, Blyleven emerges as the clearly better pitcher who deserves to be in the HoF. John is borderline at best and not my pick, but if he does get in, it's not the end of the world--both Rube Marquard and Jessie Haines are in already too.
Quote
Refresh comments list
RSS feed for comments to this post