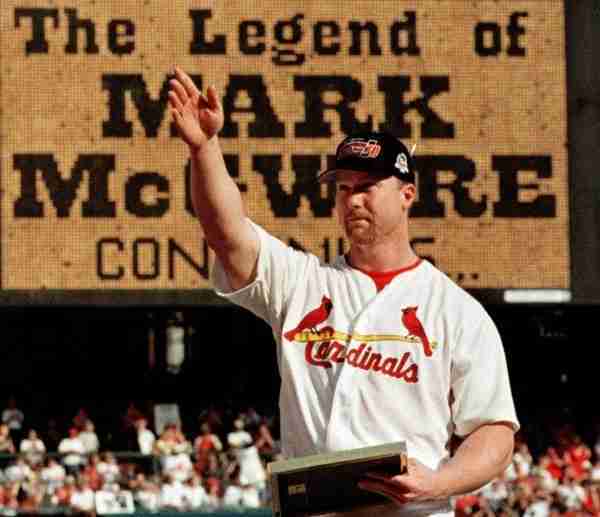 We are here to talk about the past.  Do you remember the Major League Baseball Season of 1998?  If you do, you were likely riveted by the Home Run chase contested by Sammy Sosa and Mark McGwire as they hunted down Roger Maris’ single-season Home Run record.  We cheered as Big Mac broke the record and were moved by the endorsement of the Maris family.  It brought fans back to baseball who had previously disowned the sport after the 1994 season ended prematurely resulting in the cancellation of the World Series.  The sport was alive and healthy again and Mark McGwire was a huge part of that.  But we always knew didn’t we?

1998 saw a huge rise in Home Run numbers.  Many theories were tossed around which contains the somewhat absurd (juiced baseball) to the logical (expansion year which had hitters facing diluted pitching staffs).  Players suddenly increased their Home Run tallies by radical numbers.  Of course, there was a theory that existed, and it was one we buried our heads in the sands about; Performance Enhancing Drugs.

As of this writing, Mark McGwire is among the many who have admitted to taking PEDs.  Prior to the timeline he provided as to when he started, McGwire was already a legitimate threat to go yard every game and was a constant All-Star.  By 1998, McGwire was visibly larger and this reflected in his power numbers.  We saw him with a bottle of Andro in his locker, and articles were written defending McGwire.  Nobody wanted to believe that he and his peers were cheating and if you look back on any piece ever done on McGwire in the late 90’s it was a positive piece.

Time has changed that perception.  Post Jose Canseco, the veil of Performance Enhancing Drugs was lifted and the men we all praised as heroes were vilified as cheaters and liars.   Had Mark McGwire not used PEDs, it is very possible that he would have had a Hall of Fame career.  He used them at a time when many others did when both Baseball and the viewing public did nothing to stop it.  Should this ban McGwire from the Hall?  No, and he has not been banned from Baseball and is HOF eligible.  He has yet to reach twenty-five percent from the Hall Committee and his induction chances are very much in doubt.  We believe that he should get in and not with an asterisk either.  Perhaps with an acknowledgment on his plaque with the steroid era, he played in, but definitely in the Hall.  After all, Baseball didn’t have a problem profiting on him when they knew what was going on.

His battle with Sosa was legendary and gave a big boost for the game when they needed it most.
Quote
0 #15 Darryl Tahirali 2016-07-18 21:56
Academic now. The Expansion Era Committee will be swamped for years.
Quote
-2 #14 Chrome Dog 2016-04-13 15:56
that he has a higher YES vote % here than Barry Bonds. without PEDs McGwire would have been out of the league, without PEDs Barry Bonds was already a Hall of Famer - with them he was the greatest hitter of all time.
Quote
0 #13 John Roberts 2015-08-04 00:52
Kurt you have a good point to why we should not judge players who played before mandatory drug testing. However, in the case of McGwire, once the steroid controversy began I just looked at a photo of him and said to myself "If anyone is juicing it has to be Mark, just look at him!".
Quote
0 #12 Kurt 2015-06-09 04:26
In would vote for Big Mac, as he was one of the most feared hitters of his generation. Yes, he did use steroids, but so did a lot of his peers and baseball turned a blind eye at the time. If he hadn't been called before the Senate, he may have already been inducted. There is a good chance that Piazza and Bagwell also juiced for years but they don't have the same cloud over their heads simply because they didn't have to testify under oath like McGwire did.
Quote
0 #11 JohnfromNH 2015-03-29 22:58
Quoting Committee Chairman:

cz..... and maybe (and not popular to say) they should overlook it. Sadly, that was the era that baseball had a hand in allowing to happen.

As for being inducted as an Athletic, no real issue with him as a Cardinal or A.

Why not make it the obvious one: a syringe!
Quote
-5 #10 Brian 2014-08-27 17:49
He cheated the game, the fans and is a deplorable role model for kids everywhere. Consider this question everytime... Would Jackie Robinson be proud to have his plaque next to this man ? I seriously doubt it.
Quote
0 #9 Darryl Tahirali 2013-10-22 23:09
@smokestoomu ch: Agreed: Roger Maris did not deserve an asterisk--bu t he never got one in the official record book. Then-Commiss ioner Ford Frick wanted to distinguish between Ruth's record in a 154-game season and Maris's in a 162-game season, but this was never done. Maris and the Yankees played only 161 games in '61 in any event.