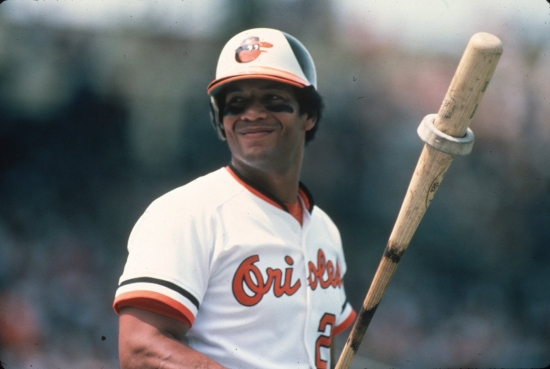 Ken Singleton began his career with the New York Mets in 1970, where he was a backup, but there was something special there.  The Montreal Expos saw it, as they traded their most popular player, Rusty Staub, for him.

Singleton was an Expo for three years, and maybe he wasn't an All-Star there, but he proved his merit as a Major Leaguer to pay attention.  His best year in Montreal was in 1973, where he hit 23 Home Runs, batted .302, and led the NL in On Base Percentage (.425).  Montreal traded him to Baltimore in 1975, and Expos fans in the 70s wish they had this one back.

The Orioles were a loaded team, and Singleton was arguably a forgotten star of this era.  Singleton belted at least 20 Home Runs each year from 1977 to 1980, and three of those years showed an OBP over .400.  Singleton was an All-Star in 1977, 1979, and 1981, with him finishing third and second respectively in the first two of those All-Star years.  Aiding Baltimore in a 1983 World Series in 1983, Singleton played one more year before retiring.

Should Ken Singleton be in the Baseball Hall of Fame?