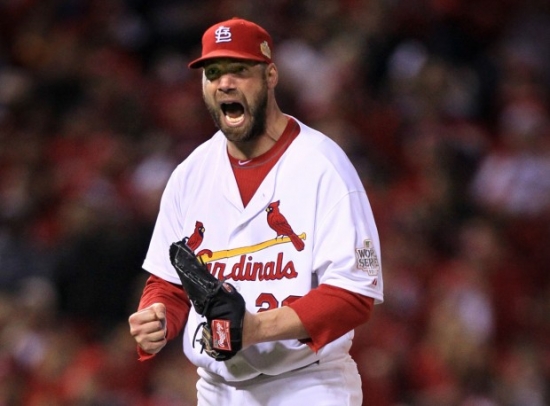 It seemed like Chris Carpenter spent far more time on Injured Reserve then he did on a Major League roster.  That wasn't the case but damned if it wasn't an unfortunate pie chart that was freakishly close to even.

Carpenter played for the Toronto Blue Jays for the first six seasons of his career, where he was an average at best Starting Pitcher who was oft-injured.  The Jays gave up on him, only offering him a minor league renewal, which kicked in his ability to become a Free Agent.  He signed with the St. Louis Cardinals, a team that knew that he would have to miss the entire 2003 season due to elbow surgery.  Carpenter was ready to go for 2004, and it is safe to say that the Cardinals would be thrilled with the results.

Carpenter went 15-5 in 2004, but in 2005, Carpenter was spectacular with a 21-5 record, a 2.83 ERA, and 213 Strikeouts.  The Cards made the playoffs that year, and Carpenter was not only an All-Star but be was also the Cy Young Award winner!  How sweet must that have felt for Carpenter after all the time he spent at home recuperating from one injury to another?  Carpenter was third in Cy Young voting in 2006, was an All-Star again, and he had a 15-8 record with a 3.09 ERA.  The Cardinals took it all this season, defeating the Detroit Tigers in five, but a return to the disabled list was in Carpenter's future.

Elbow problems returned, and he missed almost all of 2007 and 2008.  Carpenter overcame adversity again, winning the ERA Title (2.24) with a sparkling 17-4 record, and finishing second in Cy Young voting.  Carpenter was an All-Star for the third time in 2010, and after an ok 2011 season where he won another World Series ring, he was injured again in 2012 and retired shortly after.

He left the game with 144 Wins, which is approximately about 100 more than many of his doctors thought he would obtain.

Should Chris Carpenter be in the Baseball Hall of Fame?