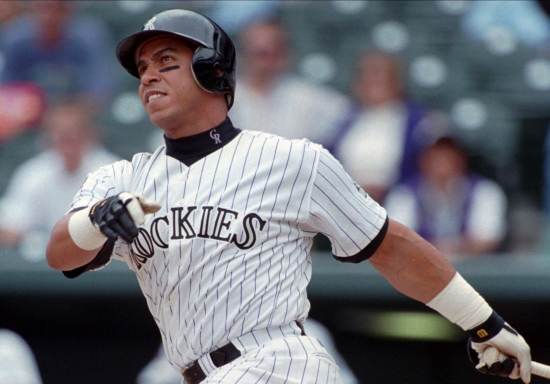 The Montreal Expos had earned a reputation for scouting and signing Latin American talent, and one of the best examples of that was Venezuelan First Baseman, Andres Galarraga.

Galarraga debuted in Montreal in 1985, and after a rocky start, he batted .305 in 1987 and was an All-Star the season after where he posted a .302 Batting Average and was the league-leader in Hits (184) and Doubles (42).  Like every home-grown star of the Expos of the late 80s and early 90s, Galarraga left when the impending free agent was traded to St. Louis.

The Venezuelan was injured for most of the year, and he only played in 95 Games for the Cards, but he signed with the expansion Colorado Rockies in 1993, and it ushered in the best era of his career.

Coors Field was an excellent fit for Galarraga, who batted .370 in the Rockies' first season, and he gave them their first batting champion.  The First Baseman was an All-Star that year, and he showed off greater power numbers hitting 31 Home Runs in both 1994 and 1995, the first time he ever eclipsed 30.  Galarraga blasted 47 in 1996 with 150 RBIs, both of which would lead the National League.  He was sixth in MVP voting that year and was seventh the year after with a 41 HR/140 RBI year, which like the season before, also saw Galarraga bat over .300.

Galarraga joined the Atlanta Braves in 1998 and was an All-Star again, showcasing excellent power metrics (44 HR, 121 RBI).  Non-Hodgkin's Lymphoma kept him out of the entire 1999 season.  He came back in 2000, providing Atlanta with 28 Home Runs and an even 100 in RBIs, and Galarraga was chosen for his fifth and final All-Star Game.  That was his last good year in baseball, and he finished off his career with stints in Texas, San Francisco, Montreal (again), San Francisco (again), and Anaheim.

A valid criticism of Galarraga was his propensity to strike out.  He was the leader in whiffs in four different seasons, and he would have 2,003 Strikeouts in his career.  Galarraga would accumulate 2,333 Hits, 399 Home Runs, and 1,425 Runs Batted In over his 19-year career.

Should Andres Galarraga be in the Baseball Hall of Fame?

Buy your Tickets to see Spring Training: Colorado Rockies (Split Squad) at Cincinnati Reds at Goodyear Ballpark in Goodyear, AZ HERE for as little as $34!