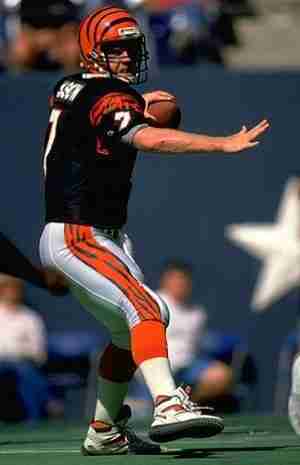 The hard-luck Cincinnati Bengals have yet to win a Super Bowl, but it was Boomer Esiason who brought them closer than anyone else had when they lost to the San Francisco 49ers on a last-minute drive in Super Bowl XXIII.  Fortunately for Esiason, his career did not need a Super Bowl Ring to be considered great.

Replacing the productive Ken Anderson, the powerful southpaw became one of the premier Quarterbacks in the league.  During his time in Cincinnati, Esiason was a consistent producer and he turned the Bengals into a high powered attack.  Mastering the play-action pass, Boomer used his strength and speed and was always producing high yardage games.