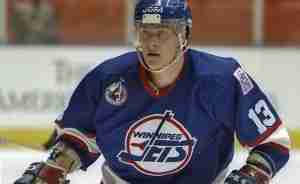 The “Finnish Flash” had one of the most spectacular rookie seasons in NHL history. Teemu Selanne scored a whopping 76 goals and 132 points for the Winnipeg Jets and became an instant sensation. Statistically, Selanne did not reach those heights again, although he would have three more seasons where he hit the century mark in points. Selanne remained a star into his 40’s and was putting pucks in the net at an age where many people struggle to get off of the couch