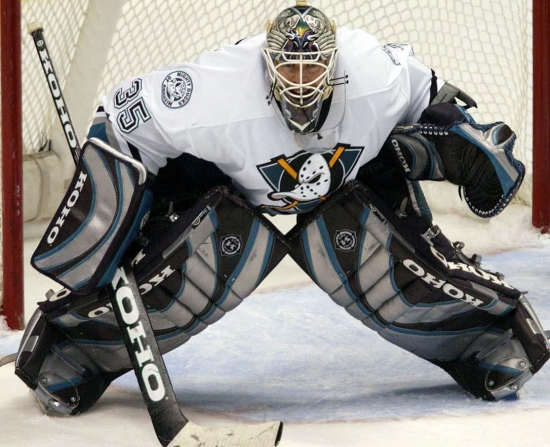 Jean-Sebastian Giguere was a First Rounder by the Hartford Whalers in 1995, and he played there briefly before he was traded to Calgary.  Giguere did not accomplish much as a Flame, so most people likely didn't think much of it when he was shipped off to the Mighty Ducks.  The hockey world would notice him soon after!

Giguere worked his way to become Guy Hebert’s backup, and he was their starter in the 2001-02 Season.  The year after, the Mighty Ducks shocked the hockey world when they made it all the way to the Stanley Cup Finals as a seven seed, and the fact they got there was attributed to Giguere’s play.  They met the New Jersey Devils, who beat them in seven. In the 2003 Playoffs, Giguere went undefeated in overtime games (7) and had a 1.62 GAA and .945 Save Percentage. The Ducks lost, but Giguere was so good that he won the Conn Smythe as the playoff MVP.  He also won the ESPY as the year’s best hockey player.

Giguere remained Anaheim’s starter for the next few seasons, finishing in the top ten in Veniza trophy four times overall.  With a far more balanced team, Giguere and the Ducks returned to the Stanley Cup, this time Anaheim on the winning side of the ledger.