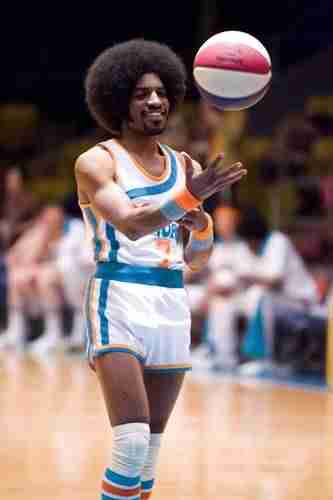 The on the court talent with the Flint Tropics, Clarence Withers (AKA: Coffee Black/Downtown "Funky Stuff" Malone/Sugar Dunkerton/ "Jumping" Johnny Johnson) brought his 70’s afro and basketball skills to the America Basketball Association. Withers’ dream was to make it to the NBA, which would happen initially by a trade near the end of the season, but his return to the Tropics in the team’s final game ever, and the use of the innovative “Alley Oop” made him the star of the court.   That said despite the third billing, the co-member of Outkast did not feel like a star in this movie and was constantly overshadowed….even with the Alley Oop.

Why you should vote for him:
He was the on court star of a major basketball film.

Why you should not vote for him:
He was overshadowed by his co-stars….and possibly a bear.