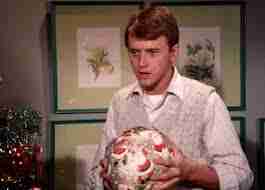 Yeah, we know. However sometimes we just want to be nice, and throw a bone to a character whose demise developed his own syndrome (the Chuck Cunningham Syndrome), whereby a character suddenly disappears and is not just written off the show, but is treated like he never existed. With that in mind, our ballot gives you Opie’s big brother, Chuck.

What do we really know of Chuck Cunningham? Based on his limited appearances, all we know is that he was always doing something basketball related and got a scholarship to Wisconsin-Milwaukee (or was it Marquette?). Sure, Richie Cunningham was actually seen playing basketball for his high school team, but was he ever going to get a free ride to a university from it? Not too likely. Basketball was the backbone of Chuck Cunningham’s brief and mediocre existence; and we would like to think that he found his way to a pro career in Europe after Tom Bosley ignored his existence.

Position Portrayed:
We have no idea.

Played for:
University of Wisconsin-Milwaukee (we think)

Why you should not vote for him:
His existence was denied by the show.