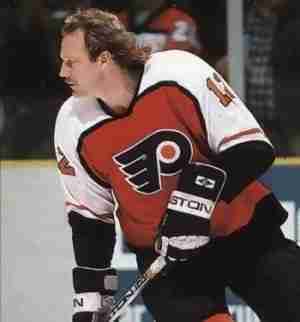 Although it can be argued that almost all hockey players take a pounding from the game, few may have put themselves in harms way more than Tim Kerr. Dubbed “the Sultan of Slot”, Kerr would park himself in from the net and do whatever it took to get the puck in the net. He was criticized by some for scoring what was considered a high amount of “garbage” goals, but the fact is that Kerr netted 50 plus goals four seasons in a row and anyone who can do that is certainly a valuable commodity regardless of the era. Kerr still holds the NHL record for 34 Power Play goals in one season. His style of play finally caught up with him and he was only able to play 655 games (which on this list is relatively low) but did score 370 goals. Although his stats were solid, there are pundits who will look down as to how he got it and it may be enough to prevent Tim Kerr from gaining induction.