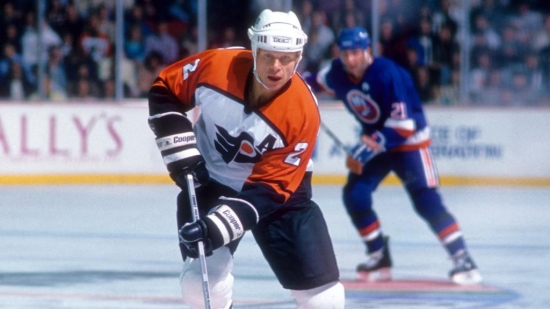 When you are the son of Gordie Howe it can be expected that you are just “Gordie’s son”, but this was not the case for Mark Howe, a Hockey Hall of Famer in his own right and one hell of a blueliner.

Like many hockey players who were in the World Hockey Association, Mark Howe did not secure a lot of attention in what was perceived as the junior league of North American professional hockey.  That being said, after his run with the Whalers (both in the WHA and the NHL) Mark Howe would have his best run in professional hockey with the Philadelphia Flyers where it would assist him in becoming n entrant to the hallowed halls in Toronto.

With Philadelphia, Howe would be named to three First Team All Star rosters and in all of those seasons he was the runner-up for the Norris Trophy.  He would have six consecutive 50 Point seasons and in the 1985-86 campaign he would finish first in Plus/Minus with 87.

Mark Howe would be inducted into the Hockey Hall of Fame in 2011.