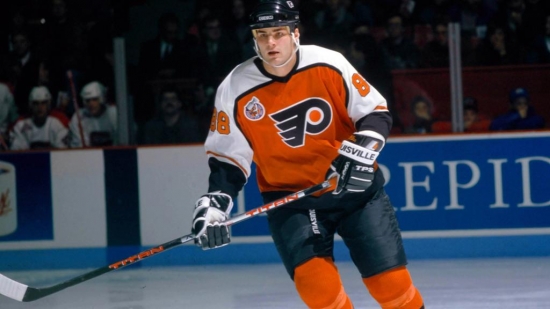 This rank might be a little controversial based on a few factors.

Eric Lindros did not play more than 500 Games with the Flyers.

The Flyers gave up a lot to get him and arguably it wasn’t worth the price they paid to get him.

He didn’t end his run with the Flyers (namely Bobby Clarke) on the best of terms.

While all of the above is accurate, these all-time 50 lists are based on what was accomplished on the ice and less so as to the intangibles around it.

Saying all of that…

Eric Lindros was dubbed “The Next One” in his junior career and in #88 you had a large framed Centre who seemingly could put the puck into the net at will.  Lindros was drafted by the Quebec Nordiques (whom he openly said he would not play for) and after a year of holding out he was traded to the Philadelphia Flyers for a king’s ransom.  With the Hockey world’s eyes upon him, Lindros provided to be a scoring force eclipsing the 40 Goal mark in his first two seasons.  While he did not do that in his third campaign, it was the strike-shortened 1994-95 year where he still scored 70 Points in 46 Games en route to winning the Hart Trophy.  The nest year, he scored 115 Points and was a Second Team All Star.

Lindros’s star in Philadelphia was centering a line with John LeClair and Mikael Renberg (The Legion of Doom Line) and much of the success that the Flyers had during the time period was due to that line.  Sadly, severe concussion issues and a collapsed lung and the way in which it was handled by the Flyers organization led to an irreparable rift between the two parties.  After being cleared in December of the 2000-01 season he would sit out the rest of the year refusing to report to Philadelphia and he would be traded in the off-season to the New York Rangers.

While his end with Philadelphia was not pretty, this was a player who had a whopping 1.36 Points per Game for the team, considerably more than anyone else.  That in itself can’t be ignored and helped to propel him to this rank.

Lindros would be indicted into the Hockey Hall of Fame in 2016.