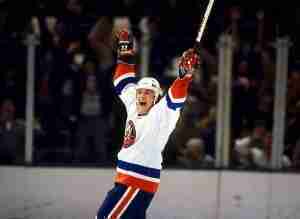 As the goal scoring machine for the New York Islanders dynasty, Mike Bossy won the Calder Trophy in 1978 and spent the next nine seasons lighting the red lamp on a frequent basis. Bossy would become the second player to net fifty goals in fifty games and would hit the half-century mark in his first nine NHL seasons. More importantly, Bossy would lead his Islanders to four consecutive Stanley Cups.