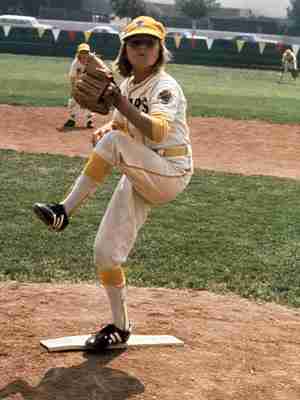 Already an Oscar winner by the time the Bad News Bears came out, Tatum O’Neal embarked on her second most famous role as the Starting Pitcher of the “Bad News” Bears. As Amanda Whurlitzer, her story was not just what she accomplished on the diamond, but her struggle to come to terms with her femininity, feelings of family and just being a pre-teen in general. Had she not joined the Bears (Kelly Leak aside), the Bears would have remained in last place which should give this entry a shot for the Hall; considering the iconic stature of the original film.

Why you should vote for her:
She was not only the star pitcher, but the best actor of the bunch (before Haley showed some serious skills in his 40’s).

Why you should not vote for her:
When she was not in the sequels, she was not missed that much.

More in this category: « All the Way Mae Mordabito Amazing Grace Smith »