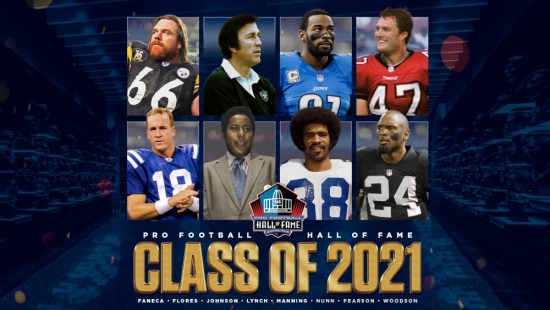 For most people, the Super Bowl is one of their favorite days of the year.  It is for us too, but we have one day on the football calendar that we like just a little bit more.  It is the day before the Super Bowl, when they announce the annual Pro Football Hall of Fame Class.

The Pro Football Hall of Fame committee met virtually two weeks ago due to COVID-19.  This is atypical, as they usually meet in person close to the Super Bowl.  We expected that leaks would come out, but to the credit of those involved, the spilling of details were minimal:

Alan Faneca:  Guard: 1998-07 Pittsburgh Steelers, 2008-09 New York Jets & 2010 Arizona Cardinals.  A Super Bowl Champion with the Steelers, Faneca went to nine Pro Bowls and was a six-time First Team All-Pro.  Faneca has been a Semi-Finalist and Finalist in his first five years of eligibility, and this made year six.  He has been arguably been “leapfrogged” by Steve Hutchinson and Kevin Mawae, and it won’t happen again.  Faneca has been overdue for some time.  Ranked #4 on Notinhalloffame.com.

Calvin Johnson: Wide Receiver:  2007-15 Detroit Lions.  Johnson went to six Pro Bowls, three First Team All-Pros and was considered the most exciting Wide Receiver of his day.  This was his first year on the ballot, and while other Wide Receivers exceed his overall stats, there was no one who passed the eye test more than “Megatron”.  Ranked #27 on Notinhalloffame.com.

Peyton Manning: Quarterback:  1998-11 Indianapolis Colts & 2012-15 Denver Broncos.  Manning took both the Colts and Broncos to a Super Bowl win, and he is a five-time MVP with 14 Pro Bowls and seven First Team All-Pros.  He would throw for 71,940 Yards and 539 Touchdowns and this is his first year on the ballot. There was zero doubt that Manning was going in, and it was already leaked that his selection was filmed at a party.  Ranked #1 on Notinhalloffame.com.

Charles Woodson:  Cornerback/Safety:  1998-05 & 2013-15 Oakland Raiders & 2006-12 Green Bay Packers.  Woodson is a Super Bowl Champion with the Packers and has 65 career Interceptions.  The nine-time Pro Bowler is also a former Defensive Rookie of the Year (1998) and Defensive Player of the Year (2009).  This was Woodson’s first year of eligibility, and like Manning, he was considered a sure thing.  Ranked #2 on Notinhalloffame.com.

Drew Pearson: Wide Receiver:  1973-93 Dallas Cowboys.  Pearson is this year’s senior inductee, and it has been a long time coming.  Pearson was a Finalist last year for the Centennial Slate, and his reaction when he was not chosen was heartbreaking.  There are many fans, and not just those of the Cowboys who are happy for the former Wide Receiver.  Ranked #28on Notinhalloffame.com.

Tom Flores: Head Coach:  Flores, a former quarterback with Oakland, Buffalo and Kansas City, became the first Hispanic Head Coach in NFL history when Al Davis promoted him in 1979 after being the Wide Receivers Coach.  Flores helmed the Raiders until 1987 and would win two Super Bowls (XV & XVIII).  He came out of retirement as Seattle’s Head Coach from 1992 to 1994, and he had an overall coaching record of 97-87.

Bill Nunn: Scout:   A reporter for the Pittsburgh Courier, Bill Nunn had a keen knowledge of the history black colleges.  These were schools that were underrepresented in the NFL, and Art Rooney, owner of the Steelers hired him as a scout, and he would also be their Assistant Personnel Director.  He remained with the Steelers until 2014, and he helped them win six Super Bowl rings. Nunn was also a charter member of the Black College Football Hall of Fame.

The ten Finalists who did not get in were:

Ronde Barber:  Cornerback/Safety:  1997-12 Tampa Bay Buccaneers.  Barber is a former Super Bowl Champion and was the 2001 leader in Interceptions.  He has over 1,000 Solo Tackles with 47 career Interceptions.  After four years as a Semi-Finalist, Barber makes it through to the Finals, but it is believed that he was not going to get in until Lynch did.  Now that this has happened, Barber has a much clearer path to Canton.  Ranked #13 on Notinhalloffame.com.

Tony Boselli:  Tackle: 1995-01 Jacksonville Jaguars & 2002 Houston Texans.  The career of Boselli was short, but he is believed to be the greatest Jaguar of all-time. The Lineman has now been a Finalist for the five years in a row, and will likely see a sixth next year.  He is a beneficiary of Faneca’s selection.  Ranked #45 on Notinhalloffame.com.

LeRoy Butler: Safety: 1990-01 Green Bay Packers.  Butler had 38 career Interceptions, won a Super Bowl and went to four Pro Bowls over his career.  He is on a four-year streak of Semi-Finalist nods, and he was also a Finalist last year.  In terms of gaining momentum over the past three years, Butler is in the upper-tier of the list, but he did not get in.  Butler leaked earlier last week that he was not chosen.   Ranked #73 on Notinhalloffame.com.

Torry Holt:  Wide Receiver:  1998-08 St. Louis Rams & 2009 Jacksonville Jaguars.  Holt won a Super Bowl with the Rams, and he went to seven Pro Bowls with 12,832 career Receiving Yards.  Holt is now a two-time Finalist, but the Wide Receiver position is loaded with worthy candidates. Johnson’s immediate induction will help him in the future.  Ranked #9 on Notinhalloffame.com.

Clay Matthews:  Linebacker: 1978-93 Cleveland Browns & 1994-96 Atlanta Falcons.  A four-time Pro Bowler, Matthews had 69.5 Sacks with 1,595 Combined Tackles.  Matthews was in his last year of eligibility, and this was the first time he made it as a Finalist.  While he has the most fervent fan base on social media regarding this year’s potential class, he came up empty.  Matthews will have to get in via the senior committee.  Ranked #75 on Notinhalloffame.com.

Sam Mills:  Linebacker: 1986-94 New Orleans Saints & 1995-97 Carolina Panthers.  A five-time Pro Bowler, Mills began his pro career in the USFL.  A four-time Semi-Finalist, Mills made it to the Finals for the first time, last year but he is now down to one year left of Modern Era eligibility.  Ranked #48 on Notinhalloffame.com.

Reggie Wayne:  Wide Receiver:  2001-14 Indianapolis Colts.  A six-time Pro Bowl and one-time Super Bowl Champion, Wayne has 14,345 Receiving Yards with 82 Touchdowns.  Wayne was a Finalist in his first two years of eligibility, and like Holt, the induction of Johnson helps him.  Ranked #8 on Notinhalloffame.com.

We will be altering our Notinhalloffame.com Football list next month to reflect the deletion of this year’s inductees and adding those who are eligible.