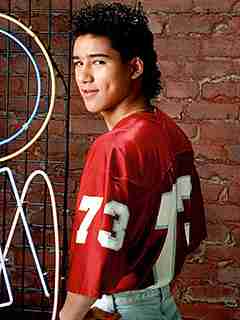 For a show that most people claimed to hate, it sure had a lot of people that could name the characters. Count us among the deniers.


As A.C. Slater, Mario Lopez was the jock of the unlikely sextet (We say unlikely, as there is no way that Screech is hanging out with the rest of them). Slater was Bayside’s star Quarterback (though we never saw him on the field) and the top amateur wrestler (we did see that) and unarguably the top athlete of Saturday morning television. Is that enough to get him in? We don’t know, but we wager that more people remember Slater than 90 percent of the other nominees.

Why you should vote for him:
He is one of the few dual sport athletes on the list.

Why you should not vote for him:
This was a kid’s show after all.


Rate this item
(1 Vote)
Tagged under
Tweet
More in this category: Abner Goldstein »