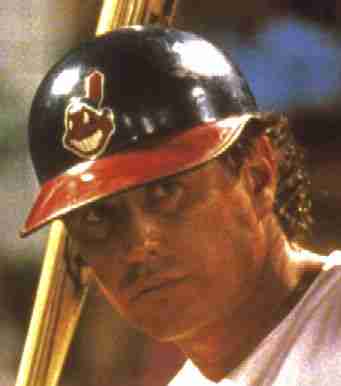 Jake Taylor may not have been the one given the best lines in Major League, but he was the heart and soul of the team and the movie (and writing that did not feel like a cliché). It was Taylor who melded the team together off the field and on the field on his gimpy knees ran out the surprise bunt (after the brilliant called shot to field) and suggested the play that Willie “Mays” Hayes score from second. Taylor also got to bed an in her prime Rene Russo which was likely of a higher quality than he was finding in the Mexican League. Overall, we wish he never signed on for Major League 2, as the conversion to Interim Manager was unlikely and the decision to keep him in the franchise seemed contrived. Granted, at Tom Berenger’s advanced age, it made sense, but surely there had to be a better use for him…or maybe don’t use him at all.

Why you should vote for him:
It was his bunt and play calling that won the game at the end of the first movie.

Why you should not vote for him:
You may think he was overshadowed by his co-stars.