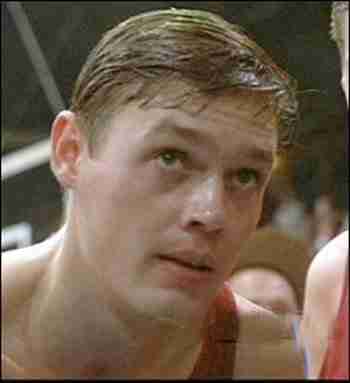 Honestly, in our opinion this is not as much of a lock as people would think. It is undeniable that without Jimmy Chitwood, Hickory High does not win the Indiana State Championship, or even makes a dent in that tournament. We will also say that without Chitwood stating that if Coach Norman Dale was fired, he would not rejoin the basketball team. However, that moment was one of the most passionless speeches uttered in a pivotal sports cinema moment. Even on the hardwood, we remember less of the montage of Chitwood jump shots as opposed to the diminutive Ollie making those two free throws in the previous game.

Still let us all remember this: Jimmy Chitwood showed us that when the star player wants a certain coach, he gets it. Come on NBA fans that sound familiar doesn’t it?

Why you should vote for him:
Take Chitwood out of Hickory and Coach Dale is fired.

Why you should not vote for him:
Did he even have more than 100 words in this movie? For an iconic character, he didn’t say much.

Rate this item
(0 votes)
Tagged under
Tweet
More in this category: « Jake Taylor