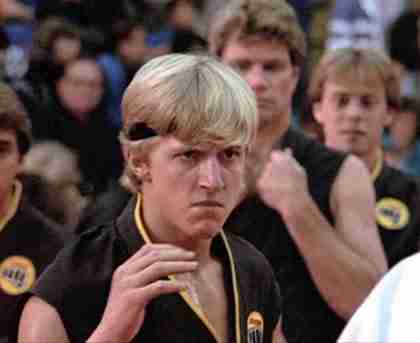 Perhaps the quintessential 80’s teen villain, Johnny Lawrence (William Zabka) had the coiffed blonde surfer hair, the yuppie parents, the arrogance, and the karate skills to make poor Ralph Macchio miserable for nearly two hours on screen. Now you know what happens to villains like this right? They sweep the leg at the end of the 1984 All Valley Tournament, yet still lose the trophy, their self-respect and a delicious looking Elizabeth Shue.

Played for:
The Cobra Kai Dojo

Why you should vote for him:
80’s villains don’t get much better than this.

Why you should not vote for him:
He LOST at the end…to a guy who learned how to fight painting houses.

More in this category: « Homer Simpson