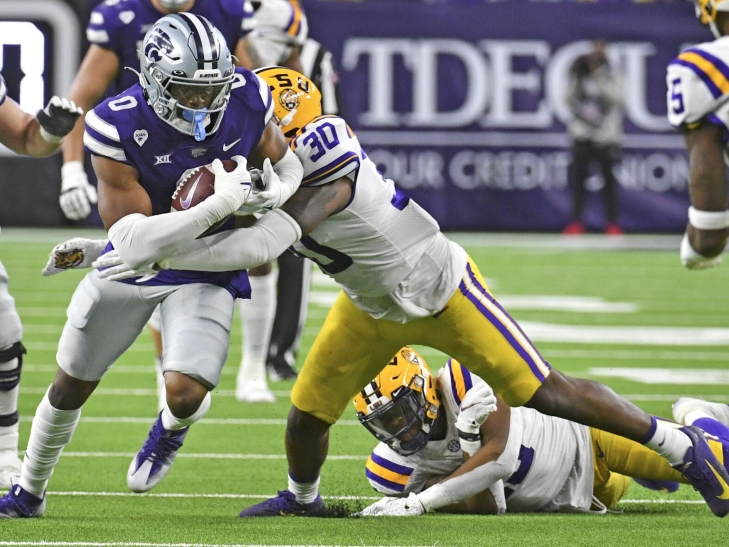 The TaxAct Texas Bowl between LSU and Kansas State was expected to be a close game. On BetMGM, the line closed with Kansas State at -4.5. This number caused many bettors to turn to LSU because the Tigers would lose by a field goal, and the bet would still hit.

Even though the TaxAct Texas Bowl has concluded, the National Championship Game is still approaching. The best places to bet on college football and sports, in general, are on betting sites with free bets like BetMGM.

If you watched the Texas Bowl, you know the Wildcats steamrolled the Tigers. The final score ended up being 42-20 in favor of Kansas State. LSU looked lifeless without Coach O, which showed throughout the entire game.

The line varied throughout the bowl season, closing with Kansas State at -4.5. However, it was as high as -7.5, but it looked like it should have been -10. Coach O’s final game coaching the Tigers was against #15 Texas A&M.

The Tigers pulled off the upset in Death Valley in this matchup 27-24, but this team did not show up in Houston on Tuesday night.

In the second quarter, the Wildcats jumped out to a 21 to nothing lead. The night started with a Malik Knowles touchdown catch. Skylar Thompson put the ball right on the money for the 21-yard score.

These two connected again to make the score 21 nothing at the 7:01 mark in the second quarter. However, we cannot forget about Deuce Vaughn for the Wildcats, who scored the team’s second touchdown of the game.

Vaughn carried the ball 21 times for 146 yards and three touchdowns on the night. He also caught a touchdown in the fourth quarter.

Before the half, LSU showed some life and made it a two-score game. Jaray Jenkins caught a 23-yard touchdown pass from Jontre Kirklin to cap off a 13 play, 75-yard drive that lasted 6:41.

As strong as the Tigers looked to close the half, they had no answer for Kansas State for 27 minutes of the fourth quarter. The Wildcats went out and dominated, scoring 21 unanswered points.

All three of the scores were from Vaughn, the biggest troublemaker of the night for Kansas State. The Tigers had no answer for the running back, which made Wildcats bettors very happy.

Kansas State -4.5 cashed, even though the Tigers rallied at the end of the game. At this point, it was too late for Tigers +4.5 bettors to have any hope. Malik Nabers caught a strike from Kirklin again to make the score 42-14.

The final score of the game happened as time expired. Kirklin threw an 81-yard touchdown pass to Chris Hilton Jr. Hilton was the team’s leading receiver with that one catch.

It was a terrible night for the Tigers, and it showed Brian Kelly has a lot of work to do to fix the program. However, it’s unlikely he will fit the mold that Coach O left in Baton Rouge.

There were two areas that caused LSU to lose this game. The Tigers were 3 of 10 on third down, compared to the Wildcats, who were 8 of 12.

They could not get off the field or continue drives, which is never a winning formula. They were also -2 in the turnover margin, and the winning percentage goes way down when this is the case by winning third down and not turning the ball over.

Kansas State took care of business in Houston, covering -4.5 without much trouble.