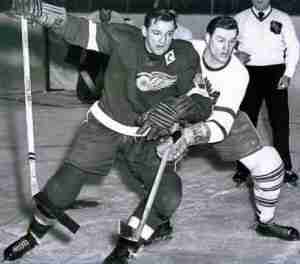 Dubbed “Bootnose” from an unfortunate incident on the losing end of a Rocket Richard punch, Sid Abel should be remembered for more than a colorful nickname from a head butt to a fist. Abel was the Centre of the Detroit Red Wings “Production Line” with Ted Lindsay and Gordie Howe and was a part of three Stanley Cup wins for Motown. His best season was the 1948-49 campaign where Abel captured the Hart Trophy and led the NHL in Goals. After his playing career was done, he became a successful coach, also for Detroit which was the position he held when he was elected to the Hockey Hall of Fame in 1969. Abel would also have his number 12 retired by the Red Wings.
Subscribe to this RSS feed