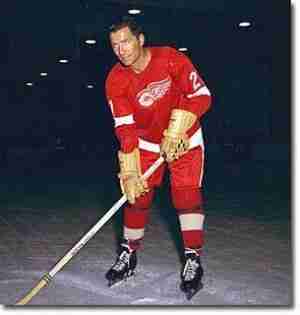 Marcel Pronovost was an excellent stay at home Defenceman who was a big part of the Detroit Red Wings multiple Stanley Cup wins in the early 50’s. He was known throughout the league for his rough style of play, delivering devastating hits to offensive attackers, and taking his own share of punishment for the benefit of the team. Pronovost would become a regular participant to the All Star Game (he played in 11) and for a four year stretch he was named to the post season All Star team. Later in his career, he was traded to Toronto and was part of what looked like an all “senior” line up that won the Cup for the Buds in 1967. He would remain in hockey becoming a scout (and a very good one) for the New Jersey Devils and be part of three Stanley Cups; long after he was inducted into the Hall of Fame in 1978.