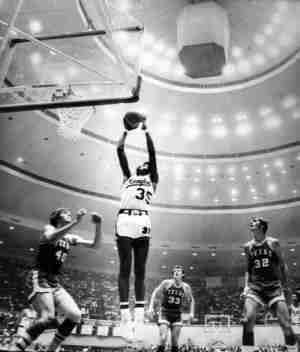 Larry Kenon is one of the least appreciated players ever.  A great big man who led Memphis to the title game in his only year there, Kenon won an ABA title with Dr. J and the Nets in his first year in the ABA.  He was a three time All-Star in the ABA but his legacy is as one of the greatest players who made the transition to the NBA.  Kenon continued his solid play with the San Antonio Spurs where he teamed with George Gervin to form one of the best scoring duos in the NBA for years.  He made two more All-Star trips in the NBA and had four consecutive seasons of twenty points a game.  Kenon was a twenty-ten guy for most of his career but was also very versatile.  How versatile?  He holds the league record for steals in a game with eleven.  Sounds like a well rounded player to us.