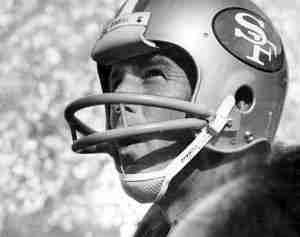 John Brodie was one of the game's early gunslingers and most of the time he had to be.  The 49ers of the 1960s were not a great team, and Brodie was often the main reason his team was competitive. By the time the ’70s rolled around, Brodie had a better team around him and though he was finally playoff bound, the Niners could not get past the Cowboys for three years in a row.  Still, Brodie won the 1970 MVP and was given more respect around the league.