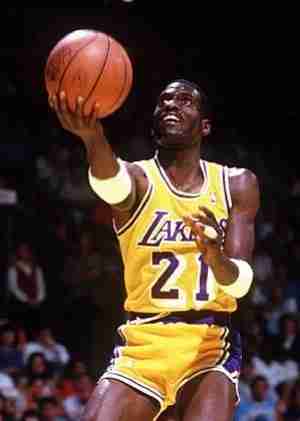 Michael Cooper is one of the most popular players in Laker history.  Why?  He wasn’t that great of a scorer though he did develop a very solid three point shot as his career progressed and he could always finish a break.  His popularity was stemmed from doing whatever the team needed him to do to win.  This mainly meant playing shutdown defense on perimeter players.  Cooper may be the best defender ever to wear a Laker uniform.  A five time champion and five time All First Team Defensive NBA Selection, Cooper is one of the best sixth men ever; and man did he look good in yellow and purple!