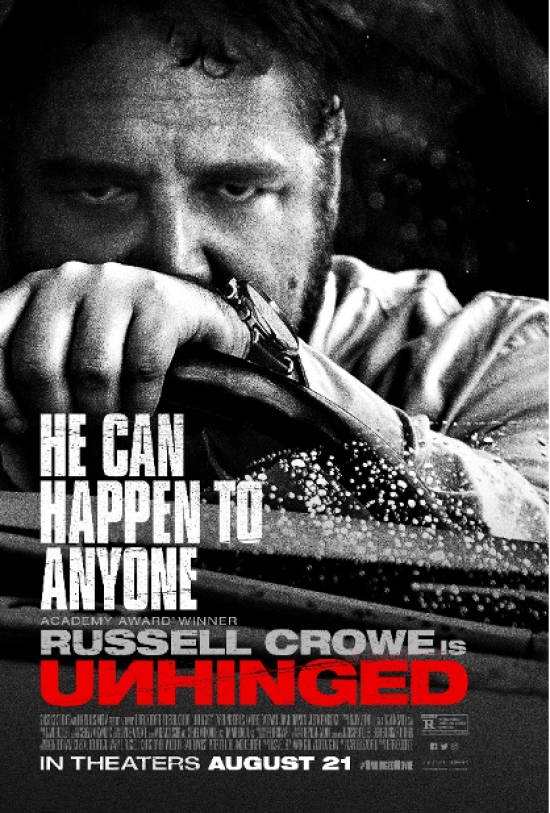 Happy New Year everyone! I know it has been a few months since my last review, but hey, I’m busy with my life in retirement! However, having said that I have my promised my brother “aka, the Chairman” of Notinhalloffame.com that I would give him reviews of shows from time to time. Over the last little while though, there has not been much on tv or Netflix/Amazon that I felt like reviewing. Come on, it was Christmas time, so we were inundated with a plethora of syrupy Christmas films that my wife likes to watch. Ok, there are a few that I did not mind as there were enough sarcasm, comedy, or gratuitous sex scenes peppered in so that I could sit through the film. But in the genre of Christmas films, these things are sometimes hard to find. No matter how much I tried to tell my wife that Die Hard and Lethal Weapon are Christmas movies, she does not seem to get it!

So here we are, a new year and a new review. For this blog’s selection, I decided to pick the movie “Unhinged” starring Russell Crowe as “the Man” or nemesis in the film. The reason for this selection is as follows:

Unfortunately, my reasoning for watching this film were found to be erroneous.  I was wrong on so many levels. I know that you say, this can’t be true! Wrong on an opinion about a film before watching, say it isn’t so! But alas, “Unhinged” joins a long list of films that over promised, under delivered, and were just large piles of fecal matter.

Before continuing on what I did and did not like about the film, let’s give a general outline of what it is about. The prologue of the film is a series of clips that outline how much road rage is hitting the country and that really no one is safe from it. Then the film really starts with a close-up of an obviously distressed man. At first glance, I thought it was John Goodman from years past, but no, this is a rather plump, heavy, bearded Russell Crowe. He is full of angst, popping some kind of pills like they are tic-tacs while looking at a home. Finally, he loses his proverbial shit, goes up to the house, breaks in, kills the occupants and sets it on fire. Then he returns to his truck and drives off.

Cut scene to see a family trying to have breakfast. We are now at the home of Rachel, which she shares with her son, brother and I think his girlfriend. We are seeing all kinds of scenes on where they are trying to live a normal life, well almost normal for Rachel (Pistorius) for whom we find out that she is in the middle of divorce proceedings and her ex is trying for everything, and her career is in the proverbial toilet. Of course, she is now late for work, late for dropping off her kid at school and just basically having a crappy morning. So taking the freeway, she gets stuck in traffic and tries to find another way to try and recover her timings. In the process she pulls up behind the aforementioned truck. Still in a hurry, which the truck driver does not seem to be as he waits through a light, Rachel (Pistorius) goes nuts on her car horn, swerves around the driver while giving various hand gestures to the driver of the truck. Of course we know the driver is “the Man” (Crowe). He follows her, cuts her off a few times and then the fun begins. So, without giving out the whole storyline, we know that it is a serious case of road rage and fixation between “The Man” (Crowe) and Rachel (Pistorius), and that it will naturally end in a way that will be violent, bloody and oh so predictable. So as you can see from the quick synopsis, there is nothing here that screams Oscar winning storylines, or even acting.

What did I like about the film…well not much really. The story line was weak and predictable, the dialogue appeared forced and there was little to no chemistry between any of them. But wait, I said what did I like about it. I would have to say the character of Andy, played by Jimmi Simpson. It does not matter what role I see him in, I always enjoy his slimy character portrayals. There is something about his characters that I always like. Unfortunately, he did not have much screen time and his character did end up as another victim of the man, sorry for the spoiler readers. But two minutes into the film, you would have figured it out anyways.

What didn’t I like? Well, it was nice to see Crowe in another product, but who knew we were going to see so much of him. I know that some actors gain/lose weight for roles, and I applaud them for that. However, in some instances is it really necessary for the story-line? In this case I don’t think it was necessary, he could have still portrayed the man who has lost it all with nothing left to live for without the massive weight gain. In my opinion that portion of the character was not really required. Hmm what else was there beside wooden performances from all of the characters…yes, the predictability. I felt like Nostradamus while watching this film, I could predict with uncanny accuracy what would happen next. There was no mystery for the film, no, what will happen next. See scene, know within 10 seconds what will happen in that scene and the next. For example, introduce young man at the gas station who offers our young heroine some help…you know his life span will only continue till the end of the scene and that he will be run over. No mystery here. There are so many examples of bad storytelling in this film that I could write a small book on them. Instead, I will content myself with this review.

There were a few throwaway characters in the film, besides Andy (Simpson), the brother and his fiancée were included in the film to be merely cannon fodder for the rage of “The Man” (Crowe). You didn’t know why they were there in the first few minutes, thus I knew their characters would meet an untimely end in the film. If there was a little bit more mystery and maybe fleshing out some of the characters, it might have proved to enhance the film. I also found some of the technical aspects of the film to be way off base. For example, our young heroine starts her Volvo, and the dashboard has warning lights blazing that would put a Christmas tree to shame. Yet, she takes it on the highway and while being pursued by “The man” she drives it through hurdles that I am sure I saw on the Dukes of Hazzard. It really made me want to buy a Volvo, if it had that many issues and still could do all that…man, I need to buy me one! Also, for an individual who complained about the traffic and whose driving skills did not seem to be the best, she did learn fast and I was impressed on how the traffic would always clear for her when she was going down the congested road. A little too fake for my tastes.

Also, I found the role of the son, Kyle (Bateman), to be a little under developed. There seemed to be little to no chemistry between him and his mother. Yes, the character is important as there is nothing that can drive a storyline like a mother defending her child, in this case it just did not seem to work for me.

As the characters in this film were so shallow, that the depth was that of a small puddle, I won’t go into how they were portrayed and what was good or bad about them. Just leave it to say that this was not a shining moment for Crowe (pretty much on par with his character of Noah in the film of the same name). I really hope that in Gladiator 2 (that is supposed to be in development) that he finds his mojo back and he returns as the actor that we all know that he is.

As for Pistorius, this is only the second character I had seen her in, and I hope that her choice of roles improves as to me, this was not a great leap for her, and did not display her talents. Will see what comes in the future.

Would I recommend this film, was I entertained? No on both counts. I would not recommend this film to anyone, even die-hard Crowe fans. Unless you can’t find anything else to watch on Netflix or Amazon, then maybe give it a try, other than that, I would give this film a hard pass and maybe watch an old classic with Crowe, i.e. Gladiator, Master and Commander to name but a few examples.

If you are interested in any other GOOD film starring Russel Crowe, please consider the following recommendations.