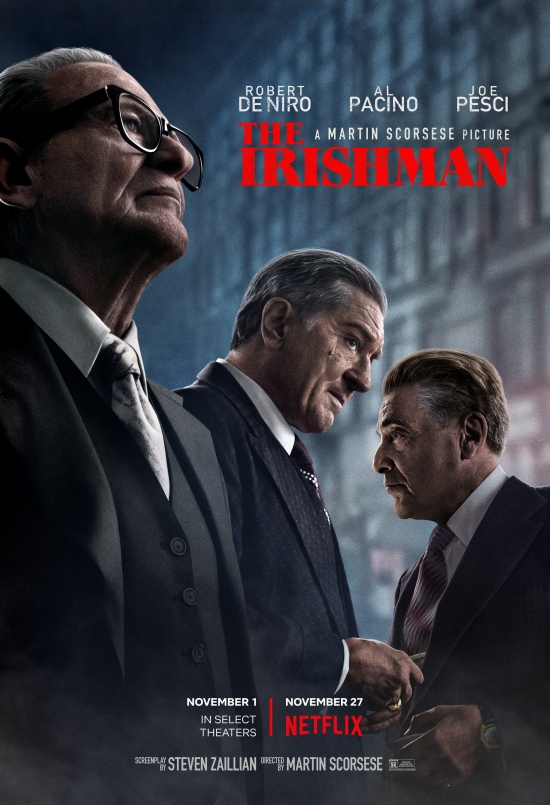 This weekend we tried something different, instead of attacking the pile of movies that I had bought, but still not watched, we looked to Netflix to provide the evenings entertainment. Having recently watched the Golden Globe Awards and hearing all the accolades for Martin Scorsese’s “The Irishman” we decided to give it a shot. Now, as this movie is 3 hours and 20 minutes long, we knew we had to be amply supplied with wine and snacks before starting. (Good thing Kevin Costner was not in this film, as it would have probably added another hour to the length!).

Anyways, wine was poured, the fire was stoked for a cold snowy night and we started “The Irishman”. This film stars some of the most legendary actors of this genre, De Niro, Pacino, Pesci, Keitel, and orchestrated by one of cinematography’s greatest director’s, Martin Scorsese. We had heard mixed opinions of this film, not only from television talk shows, but also award shows, and our friends….so we were looking forward to giving it a shot, and determine, who was right.

Not trying to give out too many spoilers as this film was just recently put on Netflix, and you may want to watch it yourself. However, we all know how some of the storylines will end, as the key events are part of history, (Bay of Pigs, Kennedy assassination, Hoffa missing) and some readers may also remember them when they were younger or studying world events. The Irishman is based on the 2004 book “I hear you paint houses” by Charles Brandt, and tells the tale of Frank Sheeran. Frank Sheeran (De Niro) now a senior and living in a home, recounts his life in a series of flashbacks. These flashbacks detail how he started to learn how to kill on the battlefields of WW2 and then how he later parlayed these same skills with the Mafia and the legendary union leader Jimmy Hoffa.  As Sheeran (De Niro) answers to many who gave him opportunities within his life, this causes him internal conflict as he endeavours to do the right thing for himself and his family, but also to his many masters.

With the general outline in mind, Scorsese continues to do what he does best, narrate a period of recent history. This narration is intertwined between facts, conjecture, and sometimes conspiracy theories. Not having read the book that this movie is based on, I am just postulating here, as I do not know for certain if the book contains these conspiracy claims as well. (i.e. Mafia relations with the Kennedy’s etc). However, he has gathered an outstanding cast, many who he has worked with before and also a smattering of actors who have made their reputations playing Mafia/Gangster related roles.

As this movie deals extensively with flashbacks, it was interesting to see how the “de-aging” special effect was used. It took a few minutes to get used to Pacino, De Niro and Pesci looking younger again. While this effect was pretty impressive to make the actors look younger, it also appeared in some scenes that it looked like a bad case of plastic surgery, as the skin looked tighter than Stallone’s face in the Expendables. Also, one thing the “de-aging” process could not do is change the movements of an older man and make him move younger. For example, there is one scene where Sheeran (De Niro) seeks retribution from a shop keeper who mishandled his daughter. In this flashback, Sheeran would be on the high side of 30, early 40. He brings his daughter to the store and lays a beating on the shopkeeper for grabbing his daughter. While the scene was intrinsic to show what he would do for his family/friends. His movements were slow, and maybe even pained. The “de-aging” process could not change the fact that 80 is closer than 70 for De Niro, and he moves as an older man, even if he is very fit for his age. The later half of the film was much more realistic as the characters and memories portrayed became increasingly closer to their own respective ages.

Now to look at the cast of this Netflix epic:

Robert De Niro as Frank Sheeran; I can totally understand the accolades that De Niro has received for this film. He continued to deliver as always. His character, somewhat reminiscent of previous Scorsese directed films containing De Niro (Goodfellas, Casino), but taken up a notch or two. He plays the soldier, swindler, hitman, union leader, bodyguard and diplomat with the style and presence that only De Niro can portray. Even when trying to negotiate with others, he can still bring the force of character, to demonstrate that he is not someone to be fooled with. Additionally, he can turn the switch to be the gracious friend, or accomplice, however the scene dictates. An outstanding performance by De Niro that states he still has the chops to lead in any film.

Joe Pesci as Russell Bufalino; Pesci is a very talented actor, his characters are deep, and resonate with the storyline, regardless of the role. As Bufalino (Pesci), his role as benefactor and the quiet Don was excellent. Having starred with De Niro in many films (Casino, Raging Bull, Goodfellas), the chemistry between them is undeniable. They play off of each others characters like a fine tuned engine. My only criticism of Pesci’s portrayal of Bufalino is also that of the “de-aging process”. While I could see his face was younger, his movements also betrayed his age, and it was noticeable throughout the first half of the film.

Al Pacino as Jimmy Hoffa: As with the previous two actors, Pacino is also a legend in his own right. He continued to deliver in this film and it was a joy to watch him act again and have a meaningful role. Especially after watching “The Hangman” which I reviewed a few weeks ago. Pacino portrayed Hoffa as a stubborn, ambitious man, who was not afraid to cut corners to get what he wanted. However, one thing that was also his demise (as portrayed by Pacino) was that his stubbornness, compiled with his desire to be respected at all costs was a strong contributor to his fall. He was unable to see how much the Mafia Don’s were controlling him either by the soft influence of Sheeran or outright manipulation. One of the other joys of this film was to see such iconic actors (Pacino/De Niro) play opposite each other. As they are both getting on in years, this was probably the last time that such a dynamic combination will be together on the silver screen.

Ray Romano as Bill Bufalino: This was a surprise, I had completely forgotten that he was in this film, and it was a real pleasure to see him in something else besides a comedy. He did a fine supporting role, and portrayed a slimy lawyer quite well. I would really like to see him pursue other roles such as this to give him greater depth then what I normally seen him do on the screen.

Bobby Canavale as Skinny Razor: His role was pretty much par for the course in pretty much anything that I had seen him in. He was the initial introduction to the Mob for Sheeran, as the recipient of beef that Sheeran was selling on the side. His role was pretty minor and probably could have been expanded a bit, as long as you did not want the movie to get any longer!

Stephen Graham as Anthony Provenzano: I found Graham as Tony Pro to be very entertaining, the scenes with Pacino were entertaining, and he played them with the same intensity as he did as Al Capone on Boardwalk Empire. He is one of the newer breed of stars in Mafia/Mob movies and I enjoy his take on this genre. I was actually quite surprised to see the breadth of his roles over the last 20 years or so when I checked his resume on IMDB. I don’t remember him in some of those roles, but it seems to me that his time is coming to make the leap into leading roles…who knows what that might bring?

Harvey Keitel and Anna Paquin as Angelo Bruno and the older Peggy Sheeran respectively: They were in the top billing of the film, yet their roles were almost non-existent. Keitel is excellent in Mafia movies and brings experience from countless movies to the screen. Yet he was relegated to minor screen time and very few lines. Anna Paquin, as Sheeran’s daughter; her sole purpose was to show disapproval of Sheeran (De Niro) and portray that she knew he was behind the disappearance of Hoffa (Pacino) who she treated as a favourite uncle. Very few lines, and really no purpose in the big scheme of things in a movie that stretched over 3 hours. I do not know why she was given the level of billing she got as her role was extremely minimal.

What did I find sub-par…well the length of the film. Scorsese could have cut at least 40 minutes off by ending it at the demise of Hoffa. Also, he introduced a plethora of characters throughout the film that had little or no effect to the plot. The sole purpose was to state that character A who was introduced to Sheeran (De Niro) was later killed with x shots to the head behind a grocery store, or character b was arrested and spent life in prison. In almost each instance these characters had little to do with the stories outcome. They could have been left on the cutting room floor, or if the director wanted to introduce the fact that they had some associations, it could have been included in a narration somewhere. It would have saved some time.

Also, I don’t know if I am fond of this “de-aging” process. Like I have mentioned numerous times, it makes the characters looks a little plasticky, like their surgery did not go well. Or if they cannot match the voice or movements with the age, it will draw your attention to it even more. Maybe it is just me, but I found it hard to follow at times.

Overall the film was great, I enjoyed it immensely and it did entertain us a great deal. The acting was amazing, and the chemistry between the main characters was solid. The sets were great as well as the all the props to give you the feel of the times portrayed. A little on the long side, but it was still enjoyable. If you want to watch a film that will eventually reach classic status, with probably the last time you see Pacino, De Niro, Pesci, and Keitel together in a film, and directed by the one of the masters, Scorsese, then this is the one for you! Just make sure you have lots of wine…. preferably an Italian chianti and enough snacks to last the entire experience!

If you are looking for other roles with the principal actors, here are some recommendations: